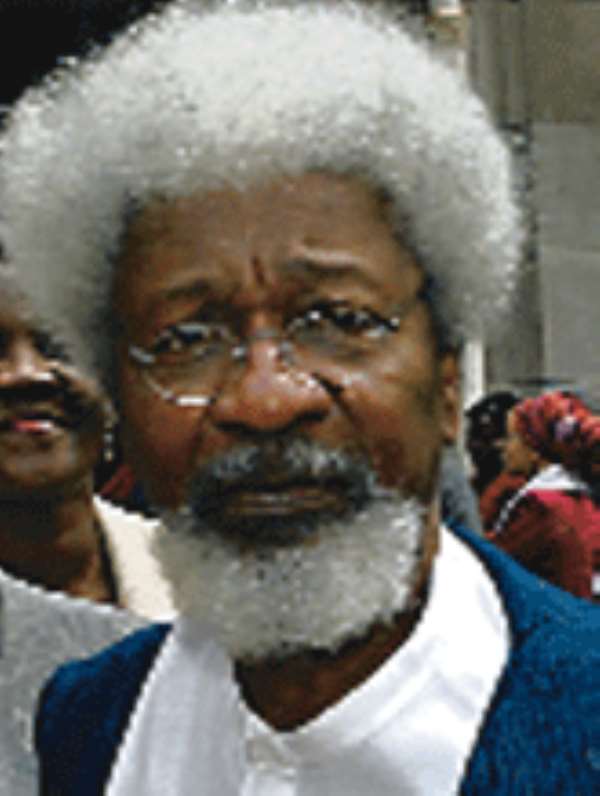 Africa's first Nobel Laureate in Literature (1986), Prof Wole Soyinka, will be the special guest speaker at the launch of the second edition of Between Faith and History — A Biography of President J. A. Kufuor in Accra on January 10, 2007.

While in Accra, Prof Soyinka will also be engaged in a special TV conversation with Mr Agyeman-Duah under the title, "Wole Soyinka, the Muses of Writing and Yoruba Mythology".

It will be sequel to a 1996 US State Department-supported interview he had with the 71-year-old Soyinka at Emory University where the professor was in exile after fleeing from Abacha's dictatorship in Nigeria as he prepared for the publication, The Open Sore of a Continent.

The TV production will later be shown in some Commonwealth countries with the support of the Culture and Diversity Programme of the Commonwealth Foundation.

Under the auspices of the Centre for Intellectual Renewal (Ghana), the Ayebia Clarke Press Limited, Oxfordshire, and the endorsement of the Arts Council of England, the launch will have as special guests the Vice-President, Alhaji Aliu Mahama, and the Chancellor of the University of Cape Coast and currently visiting Professor of Business at the University of Witwatersrand Business School of Johannesburg, Dr (Sir) Sam Jonah.

With a foreword by a leading political scientist, Prof Ali Mazuri, the second edition, which includes the first, looks at the six years of the Kufuor Presidency, especially policy successes, failures and challenges, under intriguing chapters such as Welcome to the Castle and to its Problems; The Sign of Jonah: Reconstructing the Economy; No Matter How Long the Stream Wanders, it Must End Somewhere, among other issues.

There are several back-cover praise quotations by distinguished personalities, including a leading world philosopher on ethics, Kwame Anthony Appiah of Princeton University, Prof Emeritus Ivor Wilks of Northwestern University, Prof Ali Mazuri and Kwaku Sakyi-Addo, the BBC and Reuters correspondent in Accra who says Ivor Agyeman-Duah, who currently heads the Public Affairs Department at the Ghana High Commission in London and writes for the Netherlands academic journal, African and Asian Studies Journal, "has, with this book, drifted from journalism as a draft of history to its real engagement".

Nana Ayebia Clarke, the Publishing Director of the Ayebia Clarke Press Limited, says, "I published this book because the history of Ghana has tended to be recorded by outsiders and I felt the need to be involved to redress this imbalance.

"We have proved that we, as Ghanaians and Africans, are capable of producing and managing our own institutional structures based on our needs."

Ayebia who, together with her husband, David, manage the publishing firm, had her education at Oxford University and is the Adantahemaa of Larteh, Akuapem Guan, but well-known in the publishing world as an editor of the famous Heinneman African and Caribbean Writers Series.

"We need to do more to celebrate our successes. Ivor Agyeman-Duah has made an important contribution in celebrating one of our modern-day Ghanaians heroes," she adds.

First published in the United States in 2003 by African World Press in Trenton, New Jersey, Between Faith and History was in 2005 awarded jointly with Nigerian historian, Tony Falola's A Mouth Sweeter than Salt, the Association of Third World Studies President's Distinguished Award.

It was followed by a discussion session at the Woodrow Wilson Centre for International Scholars in Washington, DC.