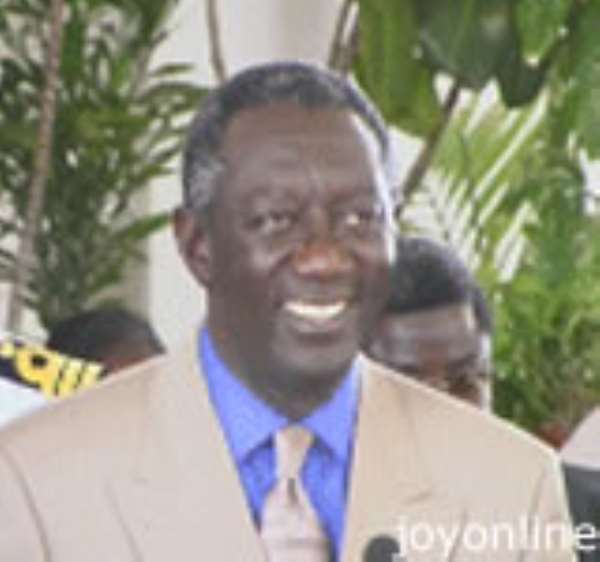 President John Agyekum Kufuor is reported to have hinted at the imminent suspension of the current load shedding exercise occasioned by electricity supply shortfall, for the Christmas and Ghana's Golden Jubilee celebrations.

The President is said to have dropped the information at a quarterly meeting with the Council of State at the Castle, Osu, on Thursday, and said he had received assurances from both the Volta River Authority (VRA) and the Electricity Company of Ghana (ECG) to that effect.

The load shedding became necessary following insufficient rainfall to maintain hydro-electricity generation and the inability to generate enough thermal electricity. Ghana's energy requirement is put at about 2,000 megawatts but the present total mix comes up to 1,200 megawatts.

President Kufuor said the problem was not the result of negligence on the part of Government or for want of doing the right thing. He therefore appealed to the people to be patient with the system as efforts were being made to fix it up. President Kufuor said it was to help to ensure adequate supply of affordable energy to drive the economy that the Government raised a 40 million dollar loan to buy into the West African Gas Pipeline Project. The Project, delayed because of the volatile situation in the Nigerian Delta Region, would now come on stream by the first quarter of 2007.

President Kufuor also informed the Council that work on the Bui Hydro-Electric Dam, to be financed with a Chinese Government soft loan, would soon take off. He said the Energy as well as Finance and Economic Planning Ministers would travel to China to conclude agreements on the financing of the project early January, 2007.