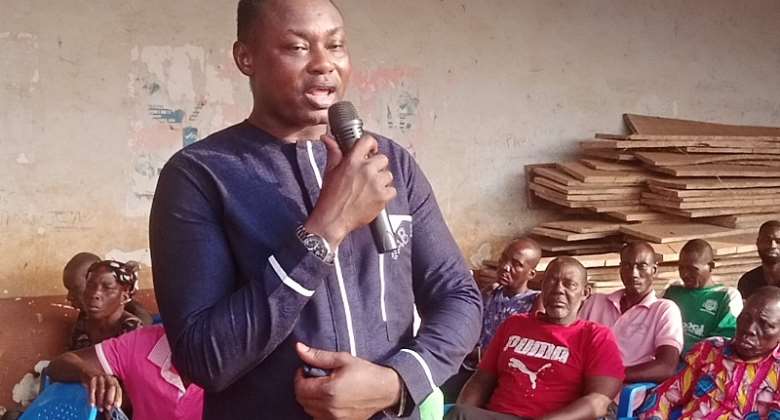 All too soon, touring of the Ekye-Amanfrom Zone by the honourable Member of Parliament for Afram Plains South constituency, Hon. Joseph Appiah Boateng popularly known as JAB1 has come to a successful end.

The tour which began on the 15th January and ended on the 20th January was to first of all, thank the electorate in the Ekye-Amanfrom Zone for contributing to his victory in the 2020 Parliamentary elections and also to interact with them about some of the pressing challenges in the various communities.

The tour in its entirety brought some level of joy, deep feelings of ecstasy and enthusiasm among the people.

Ekye Amanfrom is the last and the seventh Zone in the demarcation of Afram Plains South constituency for election purposes in NDC. It is made up of over 44 communities with about 20 of these, found along the river banks. Most of these communities are accessible by any form of water transportation most especially by the use of boats and canoes. It takes more than two and a half hours travelling from Ekye Amanfrom Township the biggest community and the landing site of the ferry (patoon) with the use of a boat to the last community known as Asore-Akura along the river bank.

According to the Honorable Member of Parliament, these communities along the river banks, are so dear to his heart and there is always the need to pay frequent visits to tackle pressing needs.

He donated 150 plastic chairs totaling GHC15,000.00, 70 street lights summing up to GHC42, 000.00 and a cash amount of GHC15,000.00. Agyata CHPS compound saw elevation when the MP called for an immediate renovation of their washroom. In addition, he provided 20 and 10 bags of cement to Tinorgah and Samankwei respectfully.

Day two was a grand durbar at Ekye Amanfrom where the Hon. MP met the Chief and people of the entire community. In an interaction with the people, he assured the electorate of how committed he is to make the party attractive. He again advocated for peace, unity and love in every committed member of the NDC Party.

Continuing his speech, the lawmaker insisted on the need to strategize in order to bridge the development gap between the area and other parts of the country. Ending his delivery, he reminded the gathering of how the party is rallying for victory in 2024 general elections and the need for all to come on board.

Day three was a celebration and enstoolment of the Hon. Member of Parliament in one of the communities known as Ogbodokope. It was joyous and deep feelings as the Chief and the entire community welcomed and led him with Borborbor, a local Ewe drumming and dancing, from the river bank to the gathering place. The chief and his elders were so excited to meet the MP as they showered lots of praise on him for having supported most of their projects.

For this reason, the kingmakers enstooled Hon. Joseph Appiah Boateng as King of Development and was given an Ewe stool name “Torgbui Ahlormade Kotoku I”. The Hon. Member of Parliament after delivering his acceptance speech donated 20 plastic chairs with metallic legs amounting to GHC2, 000.00, 20 bags of cement and one packet of iron sheets for the roofing of the teacher’s Bungalow and a cash amount of GHC2,500.00. Other communities which the MP visited the same day include Bakpakope, Agroso, Trebu, Gadorkope, etc. All of these communities together benefited a portion of the MP’s cake where street lights and plastic chairs all summing up to GHC22, 000.00 and a cash amount of GHC4, 500.00 was given out.

Honourable Joseph Appiah Boateng, as his team rallied behind him, was able to end his 'interaction and thank you' tour successfully despite the series of challenges including the storm. In the end, he shared GHC72,000.00 worth of 120 pieces of street lights, GHC56,000.00 worth of 560 pieces of plastic chairs with metallic legs, 100 bags of cement totaling GHC9,000.00, five packets of roofing sheets worth GHC6,000.00 and a cash amount of GHC44, 000.00.