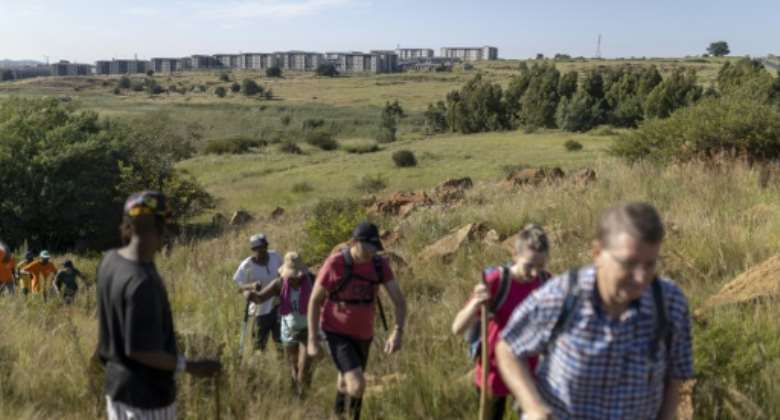 Soweto is full of gritty urban landscapes and alleys which evoke its history as one of apartheid's battlegrounds.

Yet there is also a gentler, folksier side to the vast Johannesburg township, and one that local entrepreneurs are portraying to curious tourists.

Every Sunday morning, Masike Lebele takes about 20 hikers for a walk in his childhood neighbourhood, opening their eyes to a vista where countryside, abandoned gold mines, trash and deep-rooted folk beliefs all co-exist.

"This was my playground," said Lebele, a wiry 40-year-old who wore a leopard-print shirt and a floppy hat.

"I was adventurous as a kid," he said, his eyes sharp and wearing a smile.

"We used to be little hunter-gatherers here," he said, pointing to a dam by an abandoned gold mine. "We learned to swim here."

The starting point for his walk is a "shebeen" -- a local tavern set up in a house that belonged to his grandmother.

Ochre cliffs: The legacy of a century of plundering the earth for gold. By GUILLEM SARTORIO (AFP)

A recent hike on the six-and-a-half-kilometre (four-mile) route began in the early morning.

For safety, a dozen friends accompanied the group.

Walkers crossed a street littered with rubbish and old tyres, where fresh fruit and snacks vendors had set up their stalls.

"This is where Soweto starts," said Lufuno Matidza, the elegant partner of the guide, wearing futuristic glasses, large earrings and bright pink lipstick.

In the distance rose the silhouette of Johannesburg's skyscrapers -- another world.

A wasteland dotted with reeds descended towards a stream.

A naked man sat quietly in the stream and six others in robes sang melodies. A little further on, three women wrapped in shawls had lit coloured candles, which melted on a rock.

The silence was broken by a cry. "What's that?" an anxious walker asked.

"It's a person roaring, reaching out to the ancestors," Matidza answered laconically, without breaking her stride.

The walk wove its way through a mountain of gold-coloured mine tailings, sometimes streaked with a chemical blue colour.

More than a century of plundering the earth for gold has left a strange but compelling legacy in Soweto.

Lufuno Matidza takes the path through an abandoned mine. By GUILLEM SARTORIO (AFP)

Pollution from mine dumps is common, and erosion has created unstable galleries of compacted sand, spectacular but crumbly.

"Gold is always here," said Lebele, who said he was deeply attached to the seemingly desolate landscape.

At the exit of the ochre galleries was a plateau of yellow sand.

"This is where we became kung fu masters. Each group we came across we fought," the tattooed Lebele recalled.

The heights of the dumped spoil give a spectacular view of Soweto, divided by streets into grids of small homes.

"This is our home," said Matidza.

As the cradle of apartheid, Soweto supports a flourishing tourism industry, boasting tours of museums, shebeens and a street where two Nobel winners -- Nelson Mandela and Desmond Tutu -- used to live.

But nearly 30 years after the advent of democracy, the township is plagued by ills, ranging from poverty and unemployment to substance abuse and crime.

A bird's-eye view of an abandoned mine at Soweto. By GUILLEM SARTORIO (AFP)

"Had I not heard of this hike on a local post, I would never have come here," he told AFP.

"We usually go into nature, streams, mountains and so forth, (but) this is more of a cultural experience than normal."

Noreen Wahome, 29, a Kenyan living in Johannesburg, said she came on the walk out of her love for the "untold stories of Soweto".

Lebele said his Soweto Ndofaya Hike was booked for weeks ahead.

"People just think that mine dumps are a place of danger but... these are places of fun and exploring," he said.