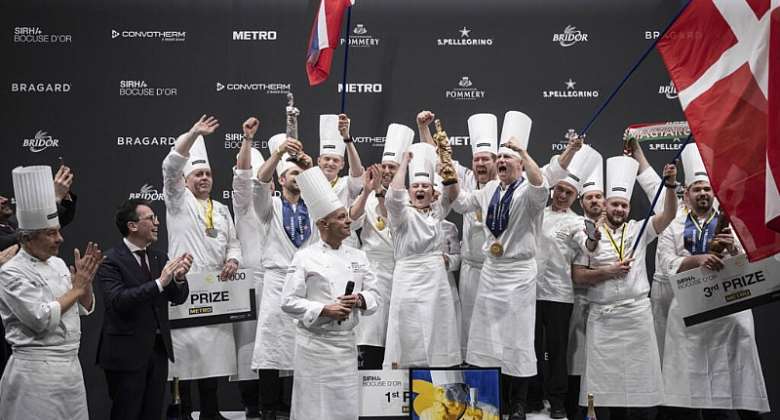 With foghorns and firecrackers, a passionate Danish crowd cheered on chef Brian Mark Hansen, 41, as he steered Denmark to its third victory in the gastronomy equivalent of the World Cup.

"I have dreamed of this for 20 years," Hansen, a chef in a Michelin-starred restaurant in Copenhagen, told French news agency AFP.

After national selections in some 60 countries, the two-day final in Lyon pitted 24 chefs against each other in the 'Golden Bocuse' competition set up by French Nouvelle Cuisine  pioneer Paul Bocuse in 1987.

Scandinavian contestants have finished at least in the top three every time in the biennial event going back to 1991.

France has seven titles, but this year chef Nais Pirollet, 25, the only woman in the competition, finished fifth.

But she managed to pick up a special prize for her "Feed the Kids" menu.

"There is no sadness, it is a victory to be here," she told AFP, explaining how she trained daily for five-and-a-half hours nonstop to replicate competition conditions.

"For young people, my participation had an impact, I hope it sends the message that you have to dare, and that when you dare you move forward anyway," she added.

Training for the competition is intense, "a bit like a fighter pilot or Formula 1 driver,"  2021 winner Davy Tissot, president of the 2023 jury, said.

Finland's 25-year-old candidate Johan Kurkela, has been known to train for 10 hours straight locked in a basement.

Denmark got the most jury votes in both categories.

The first, "Feed the kids," aimed to highlight the importance of nutrition in children's diets, using the squash.

From butternut to spaghetti squash, seeds and all, the chefs had to use their imagination to highlight the humble dish - a fruit often mistaken for a vegetable - resulting in an explosion of orange creations.

Simplicity "is the hardest thing to do," said Tissot.

"I want to taste the squash. I also wanted to be transported into a universe which I might not know," said three-star chef Dominique Crenn, honorary president of the grand final.

For the main dish, the chefs had to mesmerise with monkfish, pulling out all the stops when it came to presentation.

Mauritian chef Kritesh Halkory - one of only two candidates from Africa - used a massive sea urchin shell as a gravy boat.