Short Man’s Cathedral and The Scam of a Century 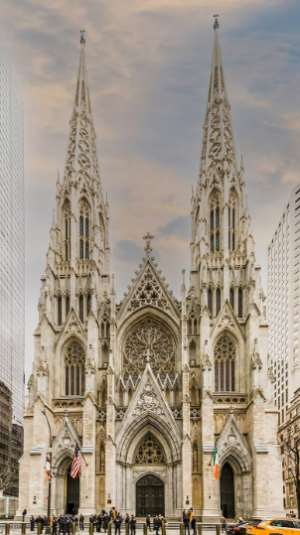 The picture associated with this article is that of St Patrick’s Cathedral located on 5th Avenue in Manhattan in New York City. Its history and construction including the compensation to the architect and masons tell a totally different story from the scam currently being perpetuated in Ghana called the National Cathedral.

Luke 11:39; “Now then, you Pharisees clean the outside of the cup and dish, but inside you are full of greed and wickedness.” Jesus’ response to a Pharisee who had invited him to eat after being questioned on why he didn’t wash before the meal. The National Cathedral for which the government of H.E Akufo-Addo has committed Ghana’s resources and invariably caused such huge financial loss to the state is nothing short of a Pagan Temple; For according to the Christian Bible, God Almighty would let Believers know that building gigantic edifices whiles simultaneously hardening your heart is as useless as Ghana’s current currency, the ‘Ghana Cedi’( ghs).The ‘Short-Man’ best described as a Pharisee would be the perfect example of those that Jesus if he indeed existed was speaking of.

The ‘Son of Man’ has risen and let all of God’s people shout Hallelujah. The ‘Son of Man’ aka Samuel Okudzeto Ablakwa, onetime vice-president of the Scripture Union on the campus of Presbyterian Boys Secondary has risen to fight and expose for the entire world to see the canker and sheer thievery and absurdity that is taking place in our dear country of Ghana all in an attempt to satisfy a Pharisee’s vision of leaving an edifice as a symbol of remembrance that “The Short-Man Was Here Sum”. Afterall, President Kufuor is associated with the Jubilee House, President Mahama with the Airport Terminal 3 and thus H.E Akufo-Addo also feels the need to construct a Pagan’s Temple otherwise known a Cathedral which is nothing but a Playboys-Grotto.

Ghana, a country whose founder Kwame Nkrumah and Architects including J.B Danquah, ‘the Doyen of Gold Coast and Ghanaian Politics,’ were neither Christians nor Muslims have suddenly turned into Africa’s version of Jerusalem and Mecca where one edifice after another is being constructed to convince the masses that God is with us and only by being Christian or Muslim would you go to paradise. Ghana Nyigba’ translated as ‘Land of Ghana,’ in the Ewe language is a Land of Spirits with a culture so unique and dynamic that many a people this world over travelled to its shores just to experience such dynamism. For some reason politicians and preacher men from both the current Christian majority and Muslim minority would have us believe that the political and cultural leaders of Ghana’s march to a semblance of political independence belonged to either religious sects. That is false for we all grew up to learn of Kwame Nkrumah’s ‘Kankam-Nyame,’ whatever that was; And J.B Danquah in his congratulatory message to Nkrumah after the latter had been named Prime Minister and Leader of Government Business would refer to the ‘gods of Ghana’ and not any Christian God or Muslim Allah. Most of these leaders may or may not have been Church goers or Masjid attendees, but there’s little proof to show that they believed in Christianity or Islam at the time of fighting the Colonialists. J.B Danquah in his many write-ups including his excellent piece of work titled “The Akan Doctrine of God,” shows nowhere that he was interested to know any other Supreme-Being except that of the Akans.

Fast-forward to post-1990 and Ghana’s Fourth Republic and suddenly the politicians and preacher men of this era would let us believe that Ghana, a Land with more gods than Ancient Egypt were Atum, Nut, Isis just to name a few that existed and reigned supreme over the land of Kemet/Mizraim until such a time as Moshe (Hebrew for Moses),an African Prince from the King James version of the ‘Holy Bible’ led the people of Israel from captivity into freedom, at least in the version of Jewish history we were all taught in Sunday School and Scripture Union Camps all over the country when some of us were kids growing up in the Township of Akosombo or as some would say “Paradise in Zion.” Mount Zion aka Ghana as we ‘Rastas’ prefer to call our dear “Nation of Ghana” is currently in a battle; A Battle for the Liberation of Zion with the ‘Son of Man’ aka Samuel Okudzeto Ablakwa leading the charge, to which we ‘Rastas’ would like to say “Selah!”

In Honor of our almae matres/alma maters, Presbyterian Boys Secondary School (PRESEC-LEGON) and Akosombo International School (A.I.S); And in remembrance of our dear brother Maxwell Adam aka Major Maxwell Mahama son to Captain Adam from House No C.24 in the suburb of Akosombo called Mess, who paid the ultimate price of death while serving his country. God Bless Our Homeland Ghana. Truth Is Our Light and We Rest Not; Truth Stands and We Fear Not, GYE-NYAME!