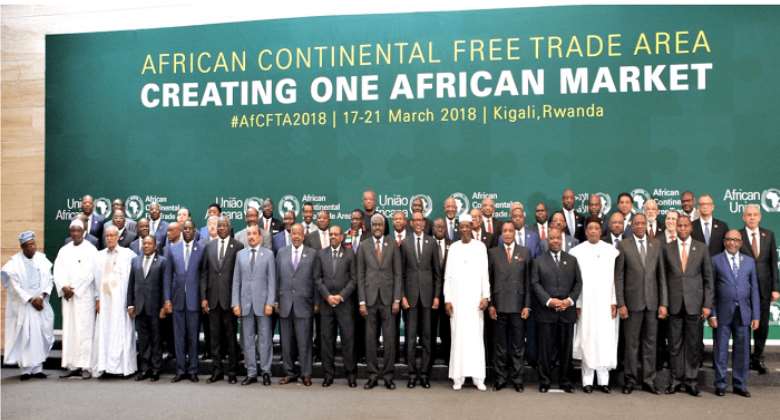 The African Chamber of Content Producers has called on Africans in Africa and the Diaspora to rally behind the ideals of the Africa Continental Free Trade Area (AfCFTA) to develop the continent and bring true prosperity to its people.

In a press statement to launch the Africa Image Ambassadors project, the chamber emphasized the need to shift the focus of Africa's development from loans and aid to Intra-African Trade.

The Chamber reiterated the need to develop strategic contents on AfCFTA to drive the interest and engagements of Africans in the Continent and the Diaspora to achieve the vision and objectives of the African Continental Free Trade Area.

The AfCFTA is the world’s largest free trade area bringing together the 55 countries of the African Union (AU) and eight (8) Regional Economic Communities (RECs). The overall mandate of the AfCFTA is to create a single continental market with a population of about 1.3 billion people and a combined GDP of approximately US$ 3.4 trillion.

AfCFTA is one of the flagship projects of Agenda 2063: The Africa We Want. It is a high-ambition trade agreement, with a comprehensive scope that includes critical areas of Africa's economy, such as digital trade and investment protection, amongst other areas. By eliminating barriers to trade in Africa, the objective of the AfCFTA is to significantly boost intra-Africa trade, particularly trade in value-added production and trade across all sectors of Africa’s economy.

In an Interview with Amb. Dwomoh-Doyen Benjamin; an Executive Director of the African Chamber of Content Producers, he disclosed that trade is one of the earliest research themes within anthropology and by extension archaeology, therefore for Africa to develop, its people must go back to their roots.

“From all historical records, African civilizations and empires like Egypt, Kingdom of Kush, Land of Punt, Carthage, Kingdom of Aksum, The Songhai Empire, The Great Zimbabwe, The Mali Empire, the Ghana Empire, the Benin Kingdom, The Kongo, and several other powerful civilizations in pre-colonial Africa saw their rise to prominence through trade. Trade brought several tribal Africans together and established strong ties leading to the birth of empires and great civilizations. AfCFTA must be seen as the largest trade empire for all Africans, this is why the Chamber has selected the AfCFTA as part of the flagship programs for the Africa Image Project”, he stated.

“The Africa Image (Aim) Project is a Pan-African leadership and development program put together by the African Chamber of Content Producers and its partners to achieve the agenda of rebranding Africa.

"The AIM project is focused on National Development Programs (NDPs) across Africa. Ambassadors are to identify issues that affect the development of their respective countries and work with the chamber to establish tangible and sustainable solutions to rectify these challenges through content.

"The launch of the Africa Image (AIm) Project has become necessary as we forge to build a platform for Africans to unite, connect, network, brainstorm and work together to turn the fortunes of Africa around for the benefit of Africans,” part of the statement read.

Dr Prince Kwame Darko, an Image Ambassador of the African Chamber of Content Producers also expressed his excitement for the opportunities that could be harnessed from the proper execution of AfCFTA. “AfCFTA is not just for manufacturers or investors in Africa, AfCFTA is also for African consumers like myself. We are part of the value chain that the African Chamber of Content Producers is targeting for the success of the initiative. Trade is one of the most critical cultural activities that encouraged interaction and exchange of ideas, commodities, and services between individuals and communities and diversely transformed African societies in history. Through the promotion of historical trade successes, and the development of strategic contents, the chamber can rally massive support for the AfCFTA”, he revealed.

The African Chamber of Content Producers' modus operandi is in accordance with the principles & objectives of the African Charter on cultural renaissance Part 1 Article 3 (f) & (h) and Part V Article 20 & 21 on the use of media in promoting Culture and guided by the constitutive act of the Africa Union. The Chamber has about thousand Africa Image Ambassadors across Africa and the Diaspora.

‘Sidelined’ GIJ threatens to withdraw from UniMAC merger
12 minutes ago