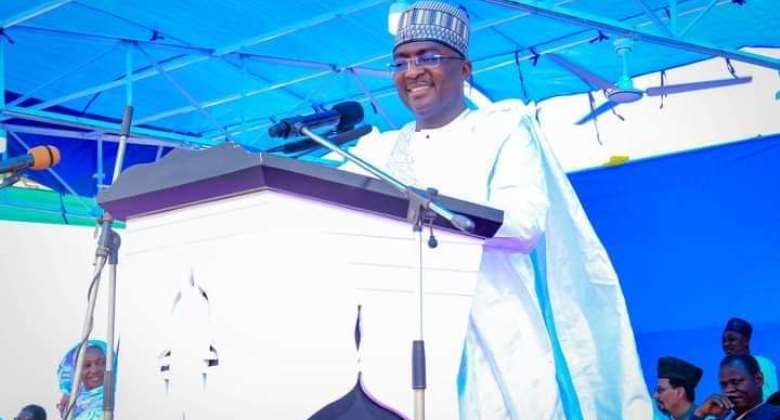 Vice President, His Excellency Alhaji Dr. Mahamudu Bawumia last Saturday joined Ghana Ahmadiyya Muslim Mission on the occasion of its 90th Annual Convention at Gomoa Pomade in the Gomoa Central District of the Central Region with a call on Ghanaians to tolerate each another.

Addressing the people on the theme for the anniversary, "Promoting Justice and Social Cohesion-The Islamic Example," Vice President noted that Ghana is a unique nation due to the coexistence among various tribes.

"Let me use this opportunity to encourage Muslims to sustain the peace and stability between them and the general public, especially religious-based groups and sects.

"The Bible and the Quran equally called on people to live peacefully with one another and to give fair hearing to each individual without fear or favour. If this fails, people will be compelled to seek justice rather than allow themselves to be oppressed by few individuals or groups of people.

He urges the Muslim youth to avoid violent means of seeking justice.

"Seek justice without fear. Pursuing justice is not an option but that doesn't mean one should use violence in an attempt to seek justice because no violent acts would be entertained in the country.

"The laws of the land allow fairness in justice delivery. We must live together in harmony with each other in spite of our religion or political beliefs. This explains why am happy with the Theme for the Celebration of this year's Convention.

"Let me admonish the Judicial system of injustice but rather apply fairness to every citizen no matter their status to enable society to have confidence in them," he stated.

In his message of peace, love and affection to all the noble souls who have gathered for the purpose of the spiritual gathering, the current Supreme Spiritual Worldwide Head of the Ahmadiyya Muslim Community Hazarat Mirza Masroor Ahmad prayed for Allah's blessing for their Jalsa with great success. "May all those who have gathered together for this unique and special religious event, gain immense spiritual blessings and may you increase in goodness, piety and righteousness."

He added, "Let us remember to be kind and merciful to humanity, for all are creatures of Allah. Do not oppress them with your tongue, your hands or in any other way. Always work for the good of mankind. Never unduly assert yourself with pride over others.

"Do not oppress them even those who are placed under you. Never use abusive language for anyone even if he abuse you. Be humble in spirit, be kind, be gentle and be forgiving. Be sympathetic towards all and wish them well, so that you may be accepted, Maulvi Mohammed Bin Salih quoted from (Kashti-e-Nuh, Ruhani khazain vol19 pages 11-12).

He also quoted the current World-wide Leader of the Ahmadiyya Muslim Community, The Khalifatul Mash V, who in a summation admonishes us as follows, " Therefore you should turn your special attention and concentrate towards achieving these fundamental spirit goals of fulfilling the rights of Allah and fulfilling the rights to His creation.

"Furthermore, each and every Ahamdi Muslim must be a loyal citizen of the country and should work hard and with determination to contribute fully towards the advancement and development of Ghana

"Explain to your fellow Ghanaian citizens that it is essential for everyone to cooperate, unite and strive together for the betterment and progress of the nation as a whole.

"You should, as Ahmadi try to render sincere and offer complete and absolute loyalty to your country to the utmost degree," Mawulvi Mohammed Bin Salih noted.

There were Fraternal messages from Traditional Leaders as well as religious sects including the representative of the Pope of the Roman Catholic Church, the Apostolic Nuncio to Ghana, Henryk Jagodzinski and Shiek Aremeyaw Shaibu who represented the National Chief Imam, Sheikh Osman Nuhu Sharabutu.