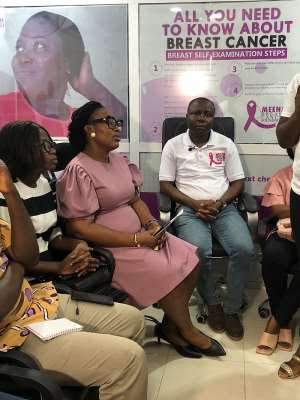 Mr Ibrahim Oppong Kwarteng, the Executive Director of Meena Breast Cancer Foundation (MBCF), has called on the government to establish a hospital solely for the treatment of breast cancer and its related cancers.

He said breast cancer appeared to be one of the deadliest diseases in the world and the government must turn its attention to its treatment due to the alarming rate of infections and deaths.

Mr Kwarteng made the call during the opening of the Foundation's Office at Mataheko- Dansoman, to facilitate its operations in Accra.

The Foundation was launched on October 6, 2022, in Accra in memory of Mrs Amina Oppong Kwarteng, who died of breast cancer on July 18, 2022, in Turkey.

Barely a few months after the launch, MBCF has been overwhelmed by breast cancer requests across the country.

He said the Office would facilitate activities of the Foundation to enable people living with the disease access financial support and counselling sessions during the period of treatment.

“It is to let the public know that they can locate an Office where they can get financial support for breast cancer treatment,” he added.

“We are cutting the sod next week for construction works to commence and we have already bought sand and blocks, and we have some money available and we are looking at three to four months to complete it,” he said.

The Executive Director said the facility would have a theatre and a big space for screening services and other health services as most of the communities that the facilities would be sited lack medical facilities.

He said there were some emotions attached to the Potsin facility as that was the school his wife had her secondary education, and unfortunately, lack a clinic.

He said the Centre aimed at reducing breast cancer mortality while establishing an all-year campaign for early detection and treatment.

The Executive Director said the Centre, which would be built across selected Senior High Schools in the country, was to help increase cancer awareness among students in the second cycle institutions.

Mr Kwarteng urged the public to regularly examine their breasts and not only in the designated October month for breast cancer awareness creation and education.

“It is a cut across educational and sensitization campaign not only to educational institutions,” he added.

He said the Foundation would visit many communities with education on breast cancer and the foods to abstain from when one contracted the disease.

He said as a country, “we have completely failed because we have undermined the dynamics of cancer and we do not seem to understand the dangerous nature of the disease.”

Mr Eric Brobbey, an Oncology Nurse at Korle Bu Teaching Hospital, expressed excitement at the Foundation's plans to start the sensitisation from the Senior High Schools coupled with the financial assistance to patients.

He said the disease was killing the productive population of the country, and much attention needed to be paid to the disease.

“It is no more an aged disease, because it is affecting the productive age of the country,” he added.

He commended the Management of the Foundation for their plans to establish Screening Centres at some selected SHSs across the country.

He called on everyone to come on board to support the fight against the disease, urging the government to turn its attention to provide interventions that would help the patients.

Mrs Adelaide Allassani-Davis, a Board Member of the Foundation, said that with the current complexity of the disease, patients needed financial support for treatment.

She called for continuous support from donors to enable the Foundation to execute its plans and programmes in line with its objectives.