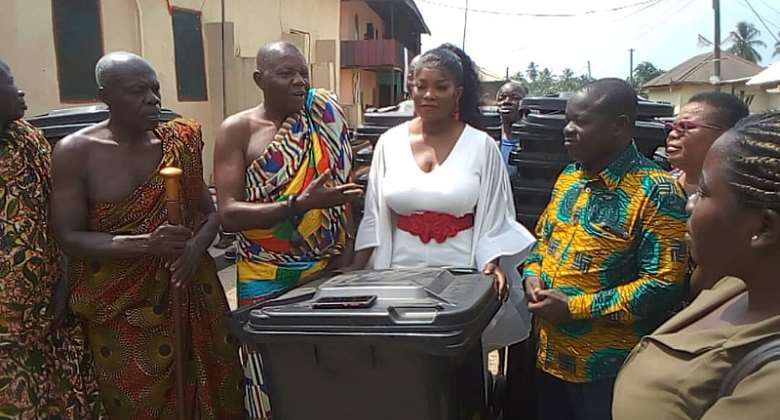 The Chief Executive Officer (CEO) of Philligant Enterprise based in Agona Swedru, Madam Ama Esoun populaly known as 'Simple Lady' has encouraged Ghanaians to be ambassadors of Environmental Health and Sanitation.

She wants sanitation clubs to be formed in schools to inculcate the spirit of environmental cleanliness in the young ones to help curb the outbreak of diseases.

"We should also go back to days of communal labour where people gather volunteering to tidy up the environment to promote hygiene and also save cost of treatment of diseases.

"Am strongly advocating for formation of environmental health and sanitation clubs in schools to enable students rekindle the spirit of environmental cleanliness in their homes and society as well," she stated.

Madam Ama Esoun said this when she donated 30 waste bins to Agona West Municipal Assembly through Swedruman Council of Chiefs as part of her 50th Birthday Anniversary celebration at Agona Swedru recently.

She indicated her willingness to help solve problems related to sanitation as a native of Agona Swedru saying it behooves on her to complement the work of the Environmental Health Department of the Agona West Municipal Assembly in its quest to ensure clean environment in Agona Swedru in particular.

"I was born and raised in Agona Swedru. It is therefore my responsibility as a citizen to assist with the growth and development of my community. Globally, every community has taken upon itself to keep its environment clean and tidy, we therefore cannot be let out in this global trend.

"I was moved by the way Agona Swedru is fast developing as a commercial town thus attracting people from all walks of life to transact businesses on daily basis. These activities usually attract filth thus putting stress on us to manage waste system in the Municipal capital.

"We must with one accord embrace the spirit of environmental cleanliness to sustain the image of our beloved community," Madam Ama Esoun noted.

She called on corporate bodies, churches, civil society groups, Associations, NGOs and individuals both home and abroad to support the Agona West Municipal Assembly as well as Swedruman Council of Chiefs to improve quality of lives of the people especially in the areas of environmental health and sanitation.

He noted that Nananom have put in place measures to sustain Agona Swedru and for that matter Agona West Municipality as the most cleanest District in the Central Region.

"For six consecutive years, Agona West Municipal Assembly has been ranked as the cleanest District in the Central Region and we are hopeful this year won't be different. We (Nananom) are very proud of this enviable record.

"Let me caution that these waste bins are meant for the streets and not households. Anyone caught to be dumping rubbish generated from households would be dealt with severly. We once again thank Madam Ama Esoun for supporting our agenda," Nana Kweku Essieni v warned.

The Head of the Environmental Health and Sanitation Department of the Agona West Municipal Assembly, Mr. George Freeman on his part called for all hands on deck to reduce environmental related sickness.

She noted that sanitation matters were everyone's business.

He assured that the waste bins would be placed at vantage points especially in business centers to serve the purpose for which it was donated.

" The Agona West Municipal Assembly has put in place effective mechanism that has helped the Environmental Health and Sanitation Department to be proactive to sanitation matters which had led the Assembly to win the Sanitation League Table of the 22 Metropolitan, Municipal and District Assemblies in the Central Region for the past six years.

"These could not have been achieved without the support and direction of our workaholic Municipal Chief Executive for Agona West, Hon. Evans Addison Onoma Coleman. We are grateful for his inspirational leadership.

"I also thank Nananom, Assembly Members, Market Traders Associations, Association of Garages, the various Transport Unions, corporate bodies and individuals for their sense of cooperation which continues to ginger us to perform to expectation and admiration of the masses," Mr. George Freeman stated.