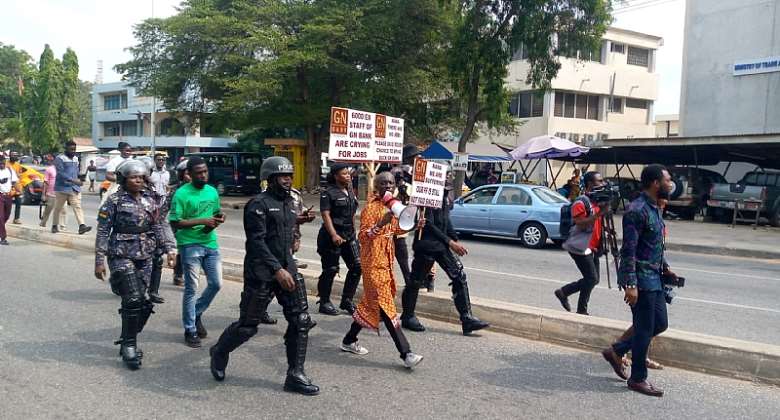 He said the revocation of the license of the Bank had made more than 6,000 ex-staff of the Bank jobless.

Mr Sarpiah, a former Coordinator of Micro Enterprise Business Department of the Bank, said this to the media after his street protest in Accra.

He commenced the demonstration from the Obra Spot, Kwame Nkrumah Circle, around 1000 hours, through to the Independence Square where he presented his petition to a staffer at the Presidency.

The Staffer, Mr Adu Asare, promised to forward the petition to the appropriate authorities at the Presidency.

Mr Sarpiah said he had worked with GN Bank for eight years before its license was revoked in August 2019.

He said the Bank provided employment to over 6,000 workers before the onset of the financial sector crisis, adding that, currently, most of them were jobless and their conditions were worsening by the day.

“The unique model of GN Bank was to build wealth for ordinary Ghanaians and provide jobs and life improvement opportunities to many people in cities, towns, villages, communities, hamlets and markets.

“GN Bank served a lot of communities with public and civil servants but without a financial institution. We provided salary, pension and LEAP disbursement services to many beneficiaries due to our reach and through our many branches,” he added.

Mr Sarpaih said though the Bank had operational challenges at the time, there could have been a more progressive and human-centric approach than collapsing it.

He appealed to President Akufo-Addo to restore the license of the Bank to complement Government's efforts at boosting economic growth and creating jobs for the youth.

He said that would help restore confidence in the indigenous Ghanaian entrepreneurs and players in the private sector.

The demonstration by Mr Sarpaih was peaceful with a few police officers protecting him.

India's sinking hill town, a casualty of the warming Himalay...
53 minutes ago