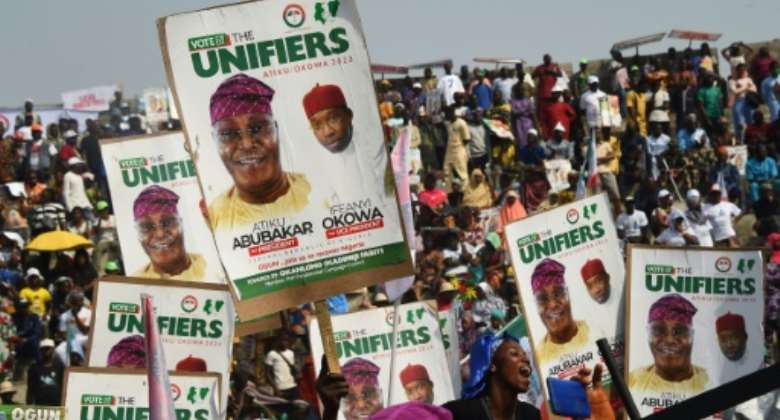 Campaigning is heating up for Nigeria's February 25 presidential election, with candidates exchanging insults and accusations over their past records. By PIUS UTOMI EKPEI (AFP)

A month before Nigeria's presidential election, top candidates have been exchanging a colourful tirade of insults and accusations over their pasts, the state of their health and even calls for each other's arrest.

With barbs such as "wobbly, wonky" to describe a candidate, a reference to another's "empire of fraud" and a likening to the "Artful Dodger" -- Charles Dickens' pickpocket character -- the rhetoric has heated up as candidates campaign for the February 25 ballot.

The election to replace President Muhammadu Buhari looks set to be a tight race, with a major third party candidate challenging the ruling All Progressives Congress (APC) party and opposition Peoples Democratic Party (PDP) for the first time since Nigeria's military rule ended in 1999.

Nigeria's past elections were often marred by fraud, vote-buying and veiled rhetoric appealing to ethnic or regional loyalties in a country almost equally split between a Christian south and mostly Muslim north.

Two of the favourites for the presidential election -- APC's Bola Tinubu and PDP's Atiku Abubakar -- are old guard politicians, both in their 70s, wealthy businessmen and accused of past corruption, charges they firmly and repeatedly deny.

In recent weeks, Tinubu's campaign has ramped up verbal attacks on Abubakar, accusing him of running a "criminal enterprise" and an "empire of fraud" by stealing public funds between 1999 and 2007, when the latter was vice-president.

Tinubu, himself nicknamed "the Godfather of Lagos" for his political influence, called on his rival to withdraw or surrender to authorities for corruption.

"They both seek to 'demarket' each other," said Jude Ilo, an analyst at the Thoughts and Mace consulting firm.

"The candidates, mainly from the APC and the PDP, are seeking to rally public opinion against each other."

More than 93 million Nigerians will go to the polls to elect a successor to Buhari, who steps down after two terms.

Whoever wins the presidency of Africa's most populous nation faces countless challenges, from armed gangs and jihadists, to high living costs that have helped push millions into poverty.

A former Lagos governor, Tinubu dubs Abubakar "Mr Sell Everything", describing him as ready "to run off the proceeds".

A US Senate investigation cites Abubakar's name in a money-laundering case.

Between 2000 and 2008, one of his wives at the time, who has American nationality, allegedly "helped her husband repatriate more than $40 million in suspicious funds to the United States via offshore accounts", according to the report.

The PDP candidate was never charged with any crime and his camp dismisses recent corruption claims as lies spread by the APC.

Abubakar has "impeccable character and integrity", according to a party press release.

In turn, the PDP has taken aim at the Lagos "Godfather", mocking him as "wobbly, wonky and narcotic-devastated" -- references to health concerns and a "drug-related seizure of property" from a US-based bank under his name in 1993, according to a US federal court filing in Chicago.

APC denies any wrongdoing by Tinubu during his time in the United States as an accountant.

At 70, the APC candidate has frequently been accused of corruption by critics, but has never been convicted of any charges.

PDP's "Atiku" team has also demanded the arrest of Tinubu, accusing him of preparing an "army of bandits" to "undermine" the ballot.

Tinubu "cannot stand straight or climb (stairs) without help, he suffers from visible tremor in his hands and throbs with the slightest physical exertion", the PDP claimed.

The health of presidential candidates is a sensitive issue in Nigeria, where Buhari was criticised for spending months in Britain during his first term receiving treatment for an unknown illness.

Fending off health claims, the APC campaign released videos on social media of their candidate dancing or riding an exercise bike, though some critics questioned the date it was filmed.

Peter Obi, the outsider in the presidential election and candidate for the Labour Party, has not been spared either.

Tinubu nicknames him "Mr Stingy", accusing him of not having spent enough on the population when he was governor of the southeast state of Anambra.

Nigeria "now needs stingy people who keep the money for the development of the country", Obi retorted.

But all the mud-slinging only distracts from debate on Nigeria's myriad problems, critics say.

"From the avalanche of allegations and counter-allegations, do we really know what should qualify or disqualify Tinubu, Atiku and Obi?" influential columnist Dan Agbese from Nigeria's The Guardian newspaper wrote.

"We should move our national politics from the current indulgence in brickbats to a higher level where facts matter more."