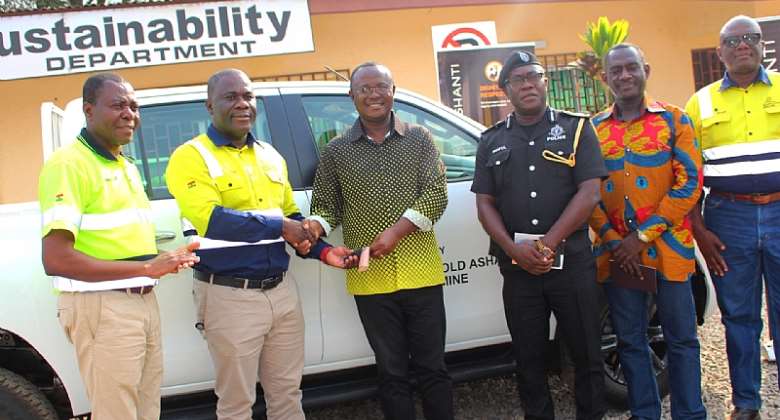 The Toyota Hilux - 4WD DC DLX vehicle which cost GH453,500 was presented after a request by the newly created Regional Command in collaboration with the Member of Parliament for Bekwai constituency Joseph Osei- Wusu, to support their operations.

The Ashanti South Police Regional Headquarters is located at Bekwai. The Command is made up of four (4) Police Divisions, fourteen (14) Districts, and sixty-three stations and posts.

During a short presentation ceremony, the Managing Director of Anglogold Ashanti Eric Asubonteng said the donation was in response to a appeal by the Police command which is also in sync with the company's 10 year Socio-economic Development Plan which talks about assisting public institutions like the police.

He added that this was not the first time the company was coming to the aid of the Police. He said, " this is the second time in about 3 years that AGA is supporting the Police. In 2019, we presented two brand new vehicles to the Obuasi Divisional Police command to support their activities ".

Mr. Asubonteng laid emphasis on the resolve of Anglogold Ashanti to support in improving security in Obuasi and its environs. He said the company recently cut sod for the construction of a District Police headquarters in Obuasi and it is keen on ensuring that the Police is well resourced to carry out its mandate successfully.

The Member of Parliament for Bekwai and the First Deputy Speaker of Parliament Hon Joseph Osei- Wusu who received the vehicle on behalf of the Police said it became necessary for the Regional Command to be tooled following the creation of the Ashanti South Regional Police command.

He said having been tasked by the IGP to spearhead the drive to resource the command, he liaised with the Police to petition Anglogold Ashanti as a key stakeholder to support the provision of vehicles. He lauded AGA for heeding their request.

Hon Joseph Osei- Wusu on the re-demarcation of the Ashanti Regional Police command said it became necessary for the Regional Police Command to be re-demarcated into Ashanti ( Kumasi), Ashanti North (Mampong) and Ashanti South (Bekwai) after it emerged that the size of the region was putting pressure on the workload of the Police.

He said the move will enhance police efficiency and increase access to Police in the Ashanti Region.