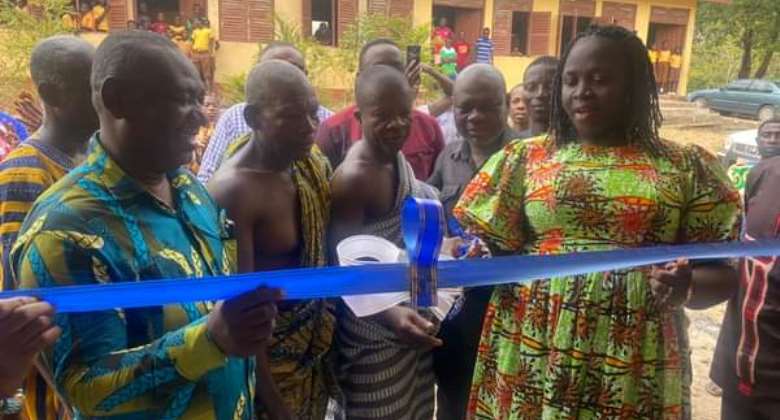 Agona Tawora, a farming community in the Agona East District of the Central Region will be connected to the national grid, DCE for Agona East, Hon. Janet Odei Painstil has said.

He said the move will boost the local economy and improve the livelihood of the people.

"For the first time in many years, Agona Tawora will be connected to the national grid to boost small scale businesses and industries. The transformer for the project is being kept safely waiting for the contractor to begin work soon.

"This is part of programmes, policies and social interventions that have been put in place by His Excellency Nana Addo Dankwa Akufo Addo led NPP Government's Rural Development agenda aimed at improving the standard of living of the citizenry.

"Am extremely grateful to President Akufo Addo for this project which is going to open up for smooth transportation of goods and services," Hon. Janet Odei Painstil noted.

The Agona East DCE said this when she commissioned a 3-unit classroom block for Tawora D/A Basic School last Monday.

Accompanied by the Agona East District Coordinating Director, Mr. Mohammed Alhassan, the DCE was happy that at long last children in the vicinity were going to have access to Junior High School education.

"Before this commissioning, Primary 6 graduates had to walk long distances to Agona Nantifa, Asafo, Kwanyarko, Kwansakrom or even as far as Agona Swedru to further their education at the Junior High School level. This explains why am extremely happy today.

"In addition to the classroom block, the Assembly is also going to construct teachers' bungalow to accommodate teachers to enhance effective teaching and learning. I came with enough school uniforms for children who don't have prescribed uniforms and many a time discouraged them from going to school for fear of being teased by their peers.

"It is free for the deserving children," Hon. Janet Odei Painstil stressed.

Hon. Janet Odei Painstil further disclosed that the Assembly was reshaping the road that links Tawora and its surrounding communities to Swedru-Bawjiase main road at Agona Nantifa to enable farmers and traders transport their goods to market centers to boost the local economy.

The Agona East District Director of the Ghana Education Service, Mr. Thomas Koffie who received the keys to the classroom block lauded the Assembly for its prompt response to the plight of the people in the nearby communities.

The District Director of Education encourages parents to enrol their children to increase the population of the school, concluding that more teachers would be posted to the school.

The Headteacher of Tawora D/A Basic School, Madam Florence Korkor in an interview with newsmen appealed to GES to post more teachers to the school.

She noted that the school with a population of over 140 from Kindergarten to Primary 6 has only three teachers saying it was putting pressure on the teachers.

"We need about 10 teachers to enable us teach effectively. As it stands now, teaching has become extremely difficult through a combination of classes, we are however doing our best to produce quality human resources for the development of the country," the headteacher stated.

Nananom from the various communities in the area expressed their appreciation to the DCE, Hon. Janet Odei Painstil, the District Coordinating Director, Mr. Mohammed Alhassan and the Assembly for the various interventions that would improve the lives of the people.

‘Sidelined’ GIJ threatens to withdraw from UniMAC merger
25 minutes ago