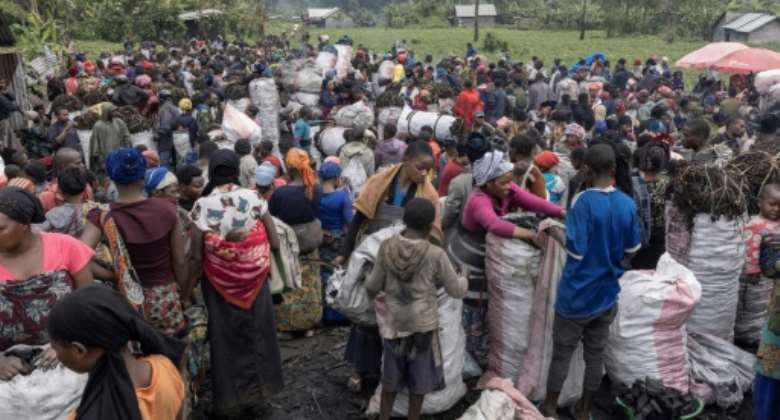 A charcoal market that has sprung up in Kibati, north of Goma. By Guerchom Ndebo (AFP)

Acrid smoke swirls amid the buzzing of dozens of chainsaws under the majestic Nyiragongo volcano, producing scenes of devastation in the heart of the lush natural treasure in eastern DR Congo.

In less than two months, more than 200 hectares (500 acres) of forest have been razed to stumps in this corner of the Virunga National Park, where tens of thousands of Congolese have fled from clashes between rebels and the military.

To survive, many have resorted to cutting down trees for firewood and charcoal, often paying a levy to militia groups for access to Africa's oldest national park, home to spectacular species of wildlife including mountain gorillas.

"Since the arrival of the displaced, we've had deforestation in the Nyiragongo volcano zone -- it's extremely worrying," park official Methode Uhoze said.

The new arrivals were forced from homes farther north by the advancing M23 militia, which resumed fighting in November 2021 after accusing the Congolese government of failing to honour an agreement to incorporate its fighters into the army.

Fabrice, 15, said he fled fighting in his village of Rugari, around 30 kilometres (20 miles) north of the provincial capital of Goma, along the border with Rwanda.

Thousands of people are living in the Bushagara refugee camp, north of Goma. By Guerchom Ndebo (AFP)

He leaves each morning for the park to make the charcoal, called "makala," which he then sells with two brothers on the side of a road.

A woman at a clandestine makala market on the main road to Goma, who asked that her name not be used, said people who cut down trees had to pay taxes to militias, including the FDLR -- a descendant of Rwandan Hutu extremist groups that carried out the 1994 Tutsi genocide in Rwanda.

But another seller pointed to a Congolese soldier carrying a sack of makala. "Look, even the soldiers here are making charcoal!" she said.

Higher up on the slopes of the volcano, soldiers and militiamen jointly organised the trafficking operation in the park, each crossing paths and even rival roadblocks with ease, as an AFP team watched.

Just a few months ago, the area was still under the authority of Virunga park officials.

Youths tend a charcoal kin at the refugee camp in Kibati. By Guerchom Ndebo (AFP)

But these days, rangers call the various militias first to alert them before venturing out, a bid to avoid harassment or worse.

In December, two rangers were killed and another wounded by suspected militiamen.

"FDLR fighters have even sold plots of land, saying 'this is the end for the park'," said Mugisha, a young man making charcoal to help support his family after fleeing the M23 in Rugari.

"We know the problems of cutting down trees in the park but we do it because we're hungry," said Byikusenge Ndibeshe, another young man lugging a load of wood on his back as he hiked back down from the volcano.

"We'd like to return home and not touch the park anymore," he said.

But despite signing a ceasefire deal in the region with the government last November, M23 has continued to clash with rival armed groups as it conquered swathes of territory in North Kivu province and advanced toward Goma.

Tens of thousands of refugees have also fled to Rwanda, which DR Congo accuses of backing the Tutsi-led M23, though Kigali denies the charge.

‘Sidelined’ GIJ threatens to withdraw from UniMAC merger
4 minutes ago