ECOWAS Commission and The Kingdom of Spain sign MoU on cooperation 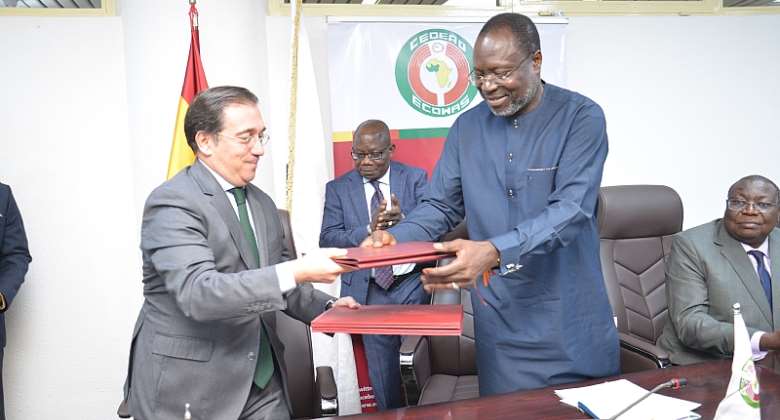 The ECOWAS Commission and the Kingdom of Spain has agreed to strengthen cooperation in areas of mutual interest in an equitable and sustainable manner.

The meeting which culminated in the signing of a Memorandum of Understanding on Cooperation was witnessed by the Delegation that accompanied the Spanish Minister of Foreign Affairs, European Union and Cooperation of the Kingdom of Spain, H.E. José Manuel Albares Bueno and the Management Team of the ECOWAS Commission.

In his welcome remarks, H.E Dr. Omar Alieu Touray, the President of the ECOWAS Commission, thanked the Kingdom of Spain for their continued support to ECOWAS in various areas notably infrastructure, energy, agriculture, gender development and capacity building.

He said over 182 million euros has been disbursed to various programme across the ECOWAS region since the Deceleration of Abuja of 22 June 2009 between the Heads of State and Government of ECOWAS and the Head of Government of Spain.

He added that the four strategic objectives of the present administration with equitable partnerships as an enabler will serve as a guide for the ECOWAS Commission in achieving its mandate of enabling shared prosperity.

The Minister of Foreign Affairs, European Union and Cooperation of the Kingdom of Spain, H.E. José Manuel Albares Bueno, said Spain regards ECOWAS as a strategic partner which was evidenced by the various programmes funded by the Kingdom in various ECOWAS Institutions and Agencies.

He noted that the special role played by ECOWAS made it a key partner for inclusion in 5th Master Plan for Spanish Cooperation with the commitment of Spanish Agency for International Development Cooperation (AECID) through the monitoring and implementation of the vast cooperation programme of Spain with ECOWAS.

He said with the new MoU in place, Spain will increase its commitment to help ECOWAS achieve success in the four strategic objectives of the new administration.