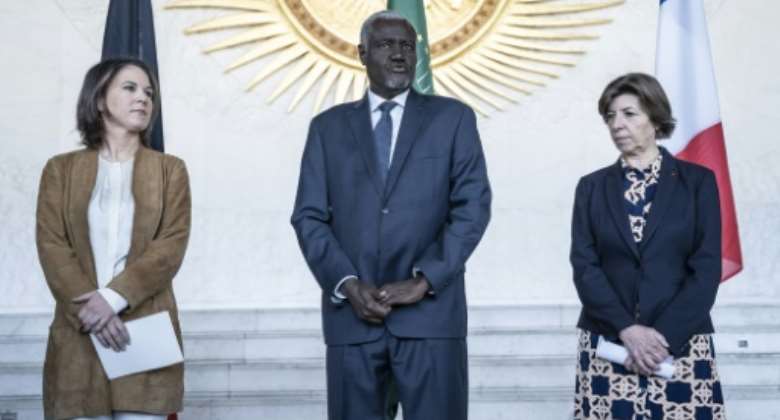 The French and German foreign ministers called Friday on Africa to condemn Russian aggression in Ukraine, while pressing for deeper ties between the European Union and countries across the continent.

"We have common interests and we have expectations of our African friends," Colonna told a press briefing at the African Union headquarters in Addis Ababa.

The call was echoed by her German counterpart Annalena Baerbock who said that peace in Europe was under attack.

"We need you, we need Africa to defend peace," Baerbock said.

Ukraine and Russia are major suppliers of wheat and other cereals to Africa, and the war's impact has been felt across the continent with sharp increases in the price of fuel, grain and fertiliser.

But many African nations have shown a reluctance to condemn Russia's invasion.

In November, many African countries abstained from a vote at the UN General Assembly to adopt a resolution calling for Russia to pay war reparations to Ukraine.

"We see the effect of this brutal Russian war all over the world and especially in the Horn of Africa," Baerbock said, adding that Russia was using grain as a weapon.

The Paris and Berlin envoys spoke at a press conference alongside African Union Commission chief Moussa Faki Mahamat at the conclusion of a two-day visit to Ethiopia.

"We want to intensify the relationship between the EU and the African Union," said Baerbock. Colonna also advocated for "better integration of the African continent into global governance".

Faki welcomed the "support" of France and Germany in the AU's quest for permanent seats at the UN Security Council.