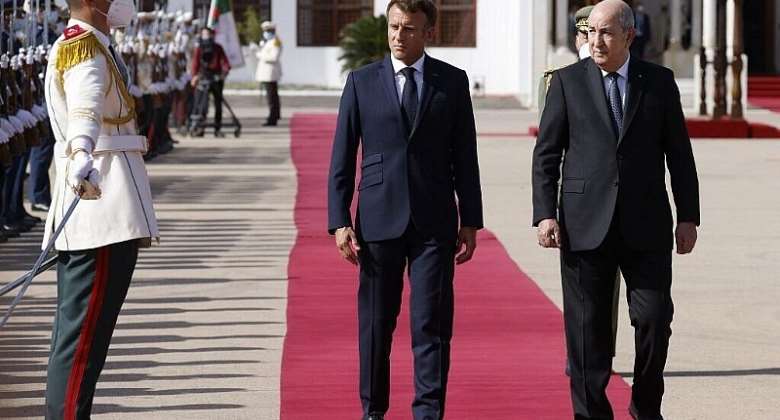 Emmanuel Macron has said he will not "ask for forgiveness" over France's colonisation of Algeria but intends to continue working towards reconciliation between the two countries. The French president hopes to welcome his counterpart Abdelmajid Tebboune in 2023.

In an interview for Le Point magazine published Wednesday, Emmanuel Macron said: "It's not up to me to ask for forgiveness, that's not what this is about, that word would break all of our ties.”

"The worst thing would be to decide: 'we apologise and each go our own way'.

"Work on memory and history isn't a settling of all accounts," he added.

In the interview, he also expressed hope that Tebboune "will be able to come to France in 2023", to return Macron's own trip to Algiers last year and continue their "unprecedented work of friendship".

France's 100-year colonisation of Algeria and the 1954-62 war for independence have left deep scars on both sides, which Macron has by turns prodded and soothed over his political career.

In 2017, then-presidential candidate Macron dubbed the French occupation a "crime against humanity".

Reconciliation
A report he commissioned from historian Benjamin Stora recommended in 2020 further moves to reconcile the two countries, while ruling out "repentance" and "apologies".

Macron has also questioned whether Algeria existed as a nation before being colonised by France, drawing an angry response from Algiers.

"These moments of tension teach us," Macron told the Algerian writer Kamel Daoud in the interview.

"You have to be able to reach out your hand again and engage, which President Tebboune and I have been able to do," he added.

He backed a suggestion for Tebboune to visit the graves of Algerian 19th-century anti-colonial hero Abdelkader and his entourage, who are buried in Amboise in central France.

"That would make sense for the history of the Algerian people. For the French people, it would be an opportunity to understand realities that are often hidden," Macron said.