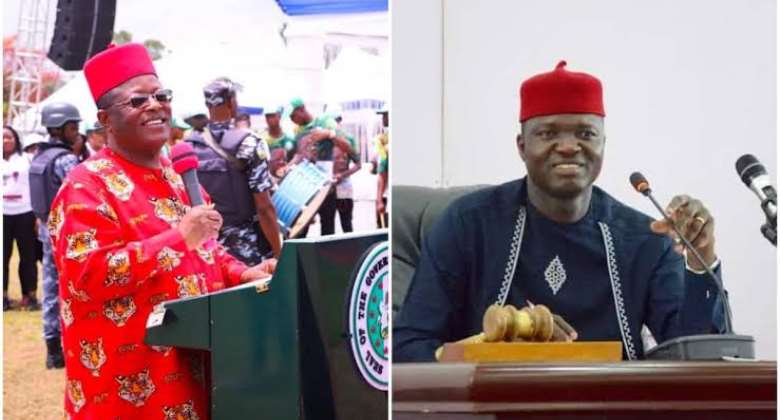 The chieftain of the All Progressive Congress and erstwhile National Publicity Secretary of the defunct New People’s Democratic Party (nPDP), Chief Eze Chukwuemeka Eze has dismissed claims by some self-serving individuals with a grossly depleted sense of gratitude who are sponsoring cheap and misleading blackmail against the governorship candidate of the APC in Ebonyi State, Rt. Hon. Ogbonnaya Francis Nwifuru, in an obvious but failed bid to whittle-down the state-wide acceptability he enjoys in the ranks of electorates which is sure to see him emerge in a landslide.

Reacting to a poorly crafted media release credited to Comrade Abia Onyike, with the title “You can’t impose your stooge on Ebonyians, Onyike tells Umahi", wherein the author stated that Gov. Dave Umahi has ruined the fortunes of Ebonyi state and is about to bequeath a horrible legacy of maladministration which has resulted in the abject poverty and hopelessness of the citizenry, Chief Eze said the absurd statement does not qualify for a response, but the need to liberate the reading public who may have been preyed by the trending media trap ignited an exigency to correct some facts misrepresented on the rumbling charade to set the records straight.

According to the party Chief and Member of APC Legacy Projects Media Team, one deducible inference from Onyike’s paradoxical opinion particularly on the performance of Gov. Dave Umahi, which clearly suggests that he (Onyike) is out of tone with reality is the revelation that he has been away from Ebonyi State and may not have visited since the inception of the current administration which has transformed the state into a development haven and emerging economic hub driven by technology and infrastructure.

“From his statement, one wonders the last time Onyuike visited Ebonyi State or read about the positive news from Ebonyi or the number of recognition/awards and testimonies from National and regional leaders of what Gov. Umahi has achieved for the State. He should at least visit home for once to get a firsthand knowledge of the transformation that has happened in Ebonyi. Trust me, Onyike may not even know the road to his village anymore because things are not the same again”.

As is customary in every democratic clime, the party chief agrees with Abia Onyike that Ebonyians would decide Governor Umahi's successor through the ballot during the forthcoming general elections, but however knocked him for describing a personality like the APC guber candidate and three term Lawmaker as a stooge, noting that such adjective is demeaning and does not befit the status of a man who has contributed in very great measures to the wind of development that has swept through the state in the past seven years through the instrumentality of lawmaking as Lawmaker and Speaker of the State legislature.

“As much as it is not my intention to promote my good friend, Comrade Abia Onyike in his misguided statement, I would like to counsel him to withdraw his ridiculous statement owing to the fact that the factors that influenced the emergence of Nwifuru as APC standard bearer are core to the fulcrum of justice, Equity and fair-play which are very fundamental standpoints of the founding fathers of the State.

The Northern, Central and Southern Senatorial Districts having gotten their shots at the governorship of the state, it is only appropriate to play the game in such a way to maintain the status-quo which has held the state and her people together for decades since the creation of the state by pushing back the. Gubernatorial slot to the Northern District of the State which informed the choice of one of the best candidates from that zone in the person of Rt. Hon. Francis Nwifuru.

Eze described the election of Rt. Hon. Nwifuru as a foregone deal as the Traditional Rulers of Ebonyi South extraction have unanimously endorsed Right Honourable Francis Nwifuru as their sole Governorship Candidate in this year's general elections.

Speaking, the Chairman of the Forum and Traditional Ruler of Ihie autonomous Community in Ivo Local Government Area, Eze Omazi Ibo Ubani said the endorsement followed credible assessment of the character and pedigree of all Candidates for the position of Governorship.

He called on people of the Zone to key behind the Candidature of Right Honourable Francis Nwifuru for the sake of equity and justice.

In this regard, Eze commended the leadership of the APC for the choice of Nwifuru from the northern Senatorial Zone as her candidate and appealed to PDP and other political parties who have fielded candidates for the governorship of the state to support the candidate of the APC to emerge in order to maintain the charter of unity, equity and justice which foundation was laid before the state was even created and consolidate on the giant strides the state has made in a multi-sectoral dimension.

He called on the good people of the state to continue to support Gov. Umahi in his determination to build a state that will be reckoned with as a beacon of all possibilities and all that is good for all of humanity.

Assuring the APC and her candidates of victory at the polls, Eze hailed the governorship candidate of the party Rt. Hon. Francis Ogbonna Nwifuru, for leading the state legislature on the path of partnership with Gov. Umahi to build a new Ebonyi and said that his emergence is a divine orchestration to consolidate the gains and achievements of the current administration which has done so much in infrastructure and human capital development.

He calls on Onyike and his likes to deploy conscience in their use of the media space, adding that baseless propaganda and cheap blackmail will profit them and their paymasters nothing especially under the current regime where Gov. Umahi and the APC have delivered on critical elements of governance to the pride of Ebonyians.