Alan Kyerematen and Dr. Afriyie Akoto must declare their assets 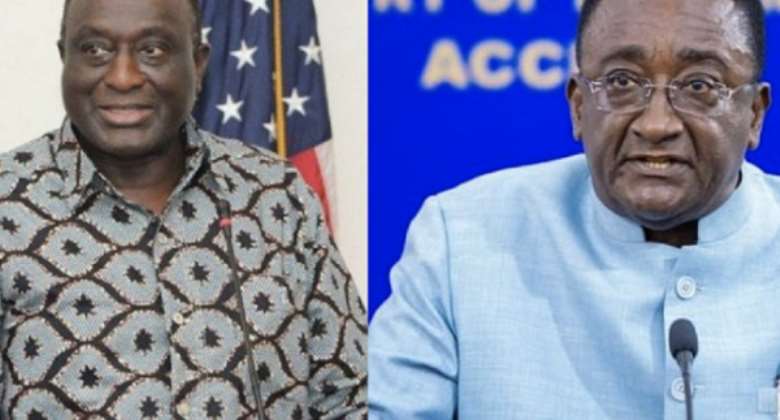 Mr. Alan Kyerematen, the outgone Minister for Trade and Industry, has finally launched his bid to lead the New Patriotic Party (NPP) in the 2024 December Presidential Elections.

In a sort of nation address on national television and other private networks, Alan Cash, as he is affectionately called, declared his intention to contest the presidential primaries of the NPP.

His declaration speech was one of alienation from what went on in the Nana Addo administration for the past six years, indicating that things could have been better done, and underscoring that all was not yet lost.

Dr. Owusu Afriyie Akoto, the Minister for Agriculture, has also resigned from his ministerial post in order to fully launch preparations for the upcoming NPP presidential primaries.

These intentions of the two gentlemen cannot be said to being sprang upon Ghanaians. Apart from any official declarations pertaining to their presidential ambitions coming from them, there is sufficient evidence to the fact that they have prepared enough – financially and logistically - to pursue their political intensions.

Posters of the two gentlemen indicating their presidential aspirations appeared way back in late 2021 across the country. So also was the organization of groups of people to prosecute the agenda.

These folks for the past six years have held the same political portfolios, and cannot be said to have not exploited the financial and logistical advantages such appointments could have given them when it came to such pursuits as presidential ambitions.

One would wonder, for instance if not for greed, why should somebody like Afriyie Akoto, who is almost an octogenarian, be considering ascending to the highest office in the land?

Has he got the strength to meet the demands of such an endeavor or is he just organizing a bargaining chip for favours of financial gains rather than the noble quest to serve his countrymen?

To start with, what has been his performance in office for the past six years, given the advantage of the duration of period for holding the same portfolio? Dr. Afriyie Akoto, who holds a PHD in Agriculture, has been handed over an appropriate and exciting policy vision, dubbed “Planting for Food and Jobs”. This vision if properly executed, would have alleviated the ongoing economic crisis that has seemingly obliterated the successes chalked by the Nana Addo government before the crunch.

The reality of the day is that Dr. Afriyie has missed the opportunity to make history, and for that matter has no single reason to dare dream about running for the presidency of this country called Ghana, especially when things have become this bad.

Alan has not done any better than Akoto in terms of rising up to the opportunity to lay the foundation for Ghana’s industrialization through the “One District One Factory” (1D1F) concept, which according to the President is one means of transforming the economy from the hitherto unproductive and restrictive one, he descriptively, tagged as the Guggisberg economy.

The 1D1F programme cannot be said to have been passionately prosecuted, considering the enthusiasm and the hopes the President generated at the onset of his administration. This I blame on Alan Cash who was handed the programme to prosecute.

Alan, I can say for sure did not or has not grasped the far-reaching effects of this developmental policy. This can be seen in what has been achieved so far with the policy.

Corruption, greed and partisanship are the viruses that have gripped and plagued the planting, nurturing and blossoming of this policy which would have provided a strong foundation for Ghana’s industrialization.

A lot of indigenes with wonderful proposals have been denied access to financial assistance to fund their projects because of demands of the usual 10% commission upfront, which they find improper and destructive.

A case in point for example is a gentleman from the North with groundbreaking ideas in agriculture, and holding 30,000 outgrower farmers, who has been incredibly denied financial assistance to fund his project, despite the fact that he has been given approval.

This gentleman, I hear, nearly commited suicide because of the debts he has incurred by the preparations he had to go through to be able to present his documents for the approval of the project.

His case is not an isolated one. There are others who have or are going through the same torture. Meanwhile, the Trade Minister had led some foreigners to Ghana to access loans or assistance to the tune of as much as $20million for this programme.

Alan has done very little in ventilating the importance of the IDIF POLICY as a national developmental project beyond political propaganda. One serious scenario relative to the above observation is that that there seems to be no project, in line with this policy, in the Volta Region, which is arguably the stronghold of the opposition National Democratic Congress (NDC).

Fellow Ghanaians, what do these two folks – Alan and Akoto – have for us? Iam tempted to say these guys are the typical greedy politicians who are looking for an opportunity to line up their pockets with state money. They should be ignored.

They have simply amassed money from their engagements as ministers over the past six years, and greedily want to multiply these fortunes further by their attempts to hold the ultimate office of the land.

If not so, can they candidly subject themselves to an honest declaration of their assets as required by the 1992 CONSTITUTION?