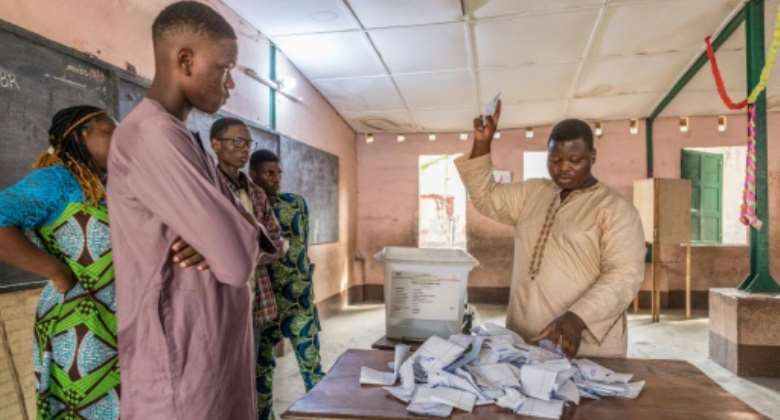 Sunday's vote was a key test for Benin, where Talon has promoted a programme of economic and political development, but critics say his mandate has eroded a once thriving multi-party democracy.

Pro-Talon Republican Bloc and Progressive Union for Renewal parties together won 81 seats in the 109-member parliament with opposition Democrats gaining 28 seats, according to preliminary results on Wednesday.

"The Democrats party rejects this result, which does not reflect the will of the people to make our party the first political force in our country," Houndete said.

"The count attributed to the Siamese parties (the two pro-Talon parties) could only be achieved thanks to the schemes put in place to distort the democratic game."

The election marked the return of the opposition to parliament in the West African nation, following a four-year absence and for the first time since Talon came to power in 2016.

Final results are expected to be released on Friday by the National Electoral Commission (CENA).

There was no immediate reaction from CENA or the two pro-Talon parties.

In 2019, opposition parties were effectively barred from participating in a legislative ballot due to stricter of election rules, resulting in a parliament dominated by Talon supporters.

Sunday's vote was marred by deadly clashes in an opposition stronghold, historic low turnout and an internet blackout, rare events in Benin.

Most of Talon's key opponents have also been jailed or gone into exile after the cotton magnate came to office.

Democrats hoped to gain seats in preparation for 2026 presidential elections, when candidates will need lawmaker support to be registered.

Parliament also plays a role in the composition of the Constitutional Court, which oversees rulings on election disputes.

Its mandate ends this year and four new judges will be appointed by lawmakers while three are chosen by the president.

The Democrats party also said it would propose an amnesty law in parliament to free jailed colleagues and allow the return of political exiles.

In December 2021, Reckya Madougou was sentenced to 20 years in prison on a charge of terrorism, while Joel Aivo -- another opposition leader and academic -- was jailed for 10 years for alleged conspiracy against the authority of the state.

Both were sentenced by a special court dealing with terrorism and economic crimes, known as the CRIET. Critics say the court has been used to crack down on Talon's opponents since his government established it in 2016.

Sunday's legislative vote took place as Benin and other Gulf of Guinea coastal countries, Ghana, Togo and Ivory Coast, face a growing threat from jihadist violence spilling over their northern borders with the Sahel.