If Ghana was a democracy! Ofori-Atta would be in exile and Bawumia an ordinary Citizen 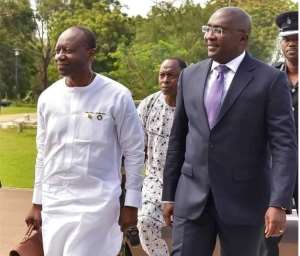 The ominous state of Ghana’s current economy is well known, but for the sake of those who may be reading this in 2030 and beyond, let me name a few indicators: Currency ranked the worst in the world in October 2022; debt to GDP ratio over a hundred percent; default on sovereign debt; and cup in hand at the IMF for a beggarly pittance of debt relief money.

For this immiseration, the index fingers of all Ghanaians are pointed at one man, the Finance Minister, Ken Ofori-Atta, the cousin of the President, Nana Addo Dankwa Akufo-Addo. Ghanaians across the political divide are united in the call for him to be sacked. If Ghana was a democracy, Ken would be on a 10-year exile.

The Vice President, Dr. Mahamudu Bawumia, on the other hand, who, as has now come to light, is only the titular head of the economic management team, would be an inconsequential everyday citizen attending the Assemblies.

Although I single out Ken and Mahamudu, my principal goal in this piece is to underscore the absence of the soul of democracy, which is accountability, in our present-day body politic, more broadly.

Ken in exile
The Athenian democrats recognized that the virtue of office holder was not given by divine dispensation and so key decision makers were held accountable for their actions – in Ghana this understanding is criminally lacking. In fact, accountability is the underlying premise of both the direct democracy of ancient Athens (508/7 and 338/7), and the representative/parliamentary/indirect democracies, jointly created by the English, Americans, and French in the late 18th and early 19th centuries – contemporary democracy.

In October 2022, a majority of the MPs of the ruling NPP held a press conference demanding that the President dismisses Ken as finance minister, for reasons related to the economic decline I mentioned above. The MPs argued that they were acting on the wishes of their constituents. In that moment, I developed some faith that perhaps the logic of the representative system was finally becoming a reality; it was brief.

When the president did not heed the call of the MPs of his own party, on November 10, 2022, a motion for censure of Ken was introduced by the minority in parliament, hoping that if successful, it would lead to his impeachment as minister. Among the charges levelled against him was the illegal diversion of funds from the Consolidated Fund towards the notorious national cathedral project. In addition, the minister was accused of having a personal stake in the debt the country had piled up under his command, because an investment bank he co-founded played the middleman role for the government in most of the credit acquisitions.

The predatory partisanship only took a brief sojourn and returned when it was time to vote on the motion. The entire majority conference staged a walkout as if they hadn’t just a month earlier called for the minister’s head.

At the end of the day, Ken won, but it was a pyrrhic victory. When he stood there in parliament and took that marathon dressing-down like a schoolboy – smothered in disgrace – I couldn’t help but ask, what’s in it for him?

It is also interesting to learn that the President has even doubled down and added another cabinet portfolio, The Ministry of Trade & Industry, to Ken, following the resignation of the minister for that ministry. A move many have interpreted as the President unequivocally giving Ghanaians the proverbial middle finger.

In Athens, there was no partisanship as we know it today, and if the logic of the representative system of modern democracy was to hold, Ken would be exiled. Of course, I do not mean so literally, even thought that would have literally been the case in Athens. The Athenian system had its excesses, the execution of Socrates its most notable regret, for which a posthumous pardon has been granted. Generally, if a political leader became unpopular for leading the polity down a certain policy path which turned out to be a failure, a vote of ostracism was most likely to be brought up against them, and if found guilty, would be formally exiled from Athens for a period of ten years. Accountability was key!

In Ghana, the soul of democracy has been stolen by the custodians of the state; the executive, judiciary, legislature, and bureaucracy (including the street level ones), with the lawyers and media enthusiastically cheerleading them on. The deceitful body (of democracy), though lifeless, is left behind, manifest in the form of elections every four years, to conceal the crime.

Mahamudu the lame duck
When discussions around what is arguably the most provocative policy issue since independence, the electronic levy, was playing out in every space in the country, Mahamudu was not only conspicuously missing from the public’s view, but also, he did not utter a single word on the matter (this is an area for growth of Ghanaian journalists). The grapevine has it that he was not completely in the loop, and only learned about the government’s decision to proceed with the diktat the same time the public did.

Mahamudu may have many competencies, but he asked us to judge him by only one yardstick: the currency (cedi) exchange rate against the U.S. dollar. Somehow, Ghanaians now recognize that the exchange rate is an area of the economy that is structural and may require long term planning to address, hence are reluctant to hold Mahamudu responsible for its recent precipitous depreciation, as though he had overseen a specific policy failure; but no doubt, it has become a political liability. His many past public lectures on the issue have been excused as mere discursive political hyperbole. He himself has since moved on and now attempts to package the intensification of the global transition to smart technology and big data as if it was an original local policy issue, naming it digitalization: smart ass! In the politics of ancient Athens, Mahamudu would be an unnoticed member of the assembly.

Becoming a political leader or statesman in democratic Athens didn’t require getting elected. Most public offices were assigned by lottery in rotation as a measure against potential corruption. You had to be at the forefront of issues du jour, (mostly vocally) in the assemblies with significant sway, either for better or for worst, and by that very fact, receive praise or persecution, to be an enduring political leader. Mahamudu hasn’t been, and Ken has been for the worst.

Democracy must be customized
In Ghana, Democracy has been turned on its head; it is managed, top-down, and lacks the culturally generated spontaneous accountability triggers required for a polity to be truly democratic.

I have read some content and listened to commentaries of some professors of political science in the country over the years on democracy, and it doesn’t appear we can look up to them for inspiration. Most of them take the nearest textbook definition of democracy and run away with it. No wonder the narrative that the democratic imagination and sensibility is alien to Africa has been internalized and mainstreamed.

The ontological lackluster of these abstractions has concealed the omnipresence of democratic practices in our indigenous body politic. The extended deliberative and consultative processes deployed in decision-making in our ethnic groups; and the intergenerational egalitarianism, especially around land ownership and use (custodianship) – galamsey would never have happened. Universal suffrage would have been organic to a democratic Ghana. Some tribes such as the Frafras were largely acephalous, hence egalitarian. Even for some of those ethnic groups that the assumption to leadership was based on genealogy, women were inherent to the franchise as king makers.

The American revolution ended in 1776 and the constitution out doored in 1787. In the intervening years, the founding fathers deliberated intensely on what they wanted their country to be like. This includes the dialogue of 85 Federalist Papers. They admired the reformed British polity with its system of checks and balances and the separation of powers and wished to replicate it without the abhorrent authority of the King.

Our constitution is still colonial. And the lawyers are quick to invoke the fictional notion of the social contract to grant it universal approval. (And, oh, those atrocious wigs must go!). The colonial bureaucracy is still intact: no wonder policing in Ghana is like the policing of black bodies in America. Our country has no founding; after independence, it proceeded in sort of a blind Darwinian evolution.

We must do democracy differently. We must build it ground up, from within, anchored by an evolving, reflexive, dynamic and culturally relevant innovative machinery of accountability. In discovering it from within, we are taking democracy back to the where it belongs, the people, to fulfil its very purpose, accountability.

Basically, democracy, broadly speaking, is a template but in practice, a sui generis set-piece.

By: Ayure-Inga Agana
The writer is an Assistant Professor of Environmental Sciences and Studies at Stonehill College in the Boston area, Massachusetts, U.S.A.

‘Sidelined’ GIJ threatens to withdraw from UniMAC merger
24 minutes ago