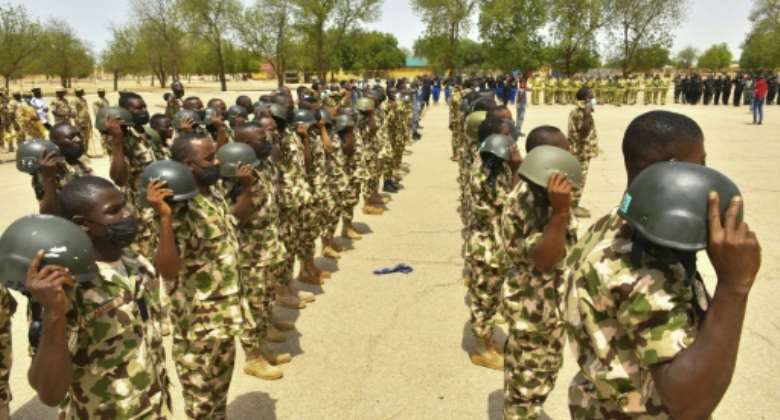 Nigeria's armed forces are fighting on several fronts, including against jihadists and criminal bandit gangs. By Audu Marte (AFP)

Twelve Nigeria security personnel and local vigilantes were killed by unidentified gunmen in an area of northwestern Kaduna state where criminal gangs and jihadists are both active, officials said on Tuesday.

A patrol of Nigeria Security and Civil Defence Corps (NSCDC) paramilitary and the local vigilantes who work with the military were ambushed around a mining site on Monday morning, Olusola Odumosu, NSCDC spokesman said in a statement.

Attacks from heavily armed criminal gangs, militias and Islamist militants occur across Nigeria, where growing insecurity will be a major theme in next month's election to replace President Muhammadu Buhari.

"Seven personnel of the Nigeria Security and Civil Defence Corps (NSCDC) were ambushed and killed alongside five others from a sister security agency and local security service," Odumosu said.

He did not reference the other security agency, but community leaders in the area identified the five others as local vigilantes working alongside military and paramilitary personnel.

The NSCDC is a security outfit established by the Nigerian government in 2003 with the primary function of protecting lives and property in conjunction with police.

The Kaduna personnel, who were attached to the Kaduna State Ministry of Mines, were ambushed while on official duty at a mining site in Birnin Gwari area of Kaduna.

The attackers carted away rifles of the slain personnel whose dead bodies were recovered and taken to a hospital in the state capital Kaduna, Odumosu said.

He did not blame any group for the attack, but Birnin Gwari has been a stronghold of criminal gangs known locally as bandits and jihadists from al Qaeda-allied Ansaru and the Islamic State West Africa Province (ISWAP).

Militants have been establishing presence in northwest and central Nigeria outside their traditional northeast base where they have been waging a more than 13-year old insurgency.

The bandit militias terrorise local communities where they raid villages, kill and kidnap residents for ransom as well as burn homes after looting them.

Jihadists have been carrying out deadly attacks and high-profile kidnappings while taking over some communities in Birnin Gwari where they assert control and enforce their strict version of Islamic sharia law.

In May last year, Kaduna State Governor Nasiru el-Rufai said ISWAP and Ansaru jihadists were setting up bases in the state, particularly in Birnin Gwari district.

This followed a daring attack on a train outside Kaduna the previous March where gunmen killed eight passengers and kidnapped dozens after blasting the rail line with dynamite and opening fire on coaches.

The government blamed the high-profile attack on jihadists working in league with bandit kidnap gangs.

In February 2020 the police said they killed more than 250 members of Ansaru jihadist group in an extensive operation in Birnin Gwari, the first official admission of jihadist presence in the region.

Ansaru is believed to be active in central Kogi state, Birnin Gwari forests, and the areas around Kaduna and Nigeria's capital Abuja where they collaborate with bandits, according to security sources.