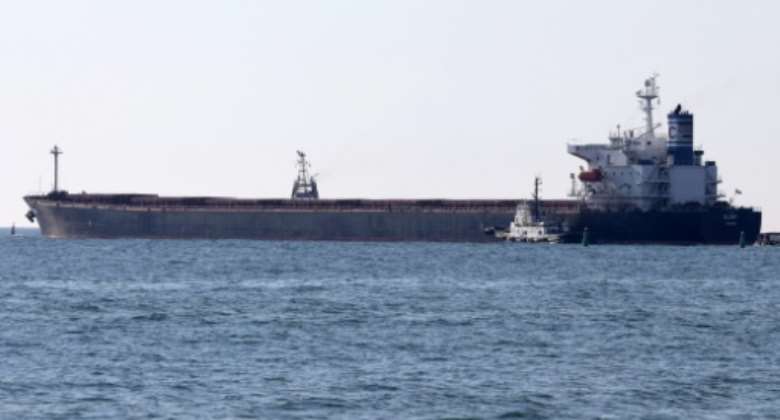 A file picture of the Marshall Islands-flagged bulk carrier M/V Glory leaving the Ukrainian port of Chornomorsk on August 7, 2022. By Oleksandr GIMANOV (AFP/File)

Suez Canal maritime traffic was "normal" Monday after a cargo vessel carrying Ukrainian grain ran aground but was then refloated and towed away, said the Egyptian authority running the vital waterway.

The incident involving the 225-metre-long Marshall Islands-registered M/V Glory had briefly sparked fears of a repeat of a major 2021 blockage when the giant container ship Ever Given became diagonally wedged in the canal.

That week-long closure of the man-made waterway linking Asia and Europe cost billions of dollars through shipping delays, and the life of an employee of the Suez Canal Authority in the operation to free the mega-ship.

SCA chief Osama Rabie gave the all-clear Monday when he said "traffic is moving normally on the Suez Canal" after the authority had "mobilised four tugboats to tow the ship" allowing it to resume its passage through the canal.

"The canal is on track to register 51 vessels passing in both directions Monday," he said in a statement.

A file photo taken on May 27, 2021 shows a small boat sailing in front of a ship in Egypt's Suez Canal. By Ahmad HASSAN (AFP/File)

Smooth traffic through the Suez Canal is vitally important for Egypt, the Arab world's most populous country, which is currently battered by an economic crisis that has seen the currency lose 75 percent in value in less than a year.

The waterway, used for about 10 percent of the world's maritime trade, is one of Egypt's main sources of foreign currency revenue, bringing in more than $7 billion a year.

Egyptian President Abdel Fattah al-Sisi approved a project last year to widen and deepen the southern section of the canal where the Ever Given got stuck.

In 2021, the Ever Given became wedged diagonally across the canal when visibility was sharply reduced during a sandstorm, disrupting trade flows for nearly a week.

According to the SCA, Egypt lost between $12 million and $15 million every day of the closure, while insurers estimated that global maritime trade suffered billions in lost revenue per day.

Fears of a costly new blockage were sparked on news of Monday's incident.

The Glory was passing through the canal on its route "from Turkey to China" when it experienced "a sudden technical failure," according to the SCA.

The ship was carrying a shipment of corn from war-torn Ukraine, according to the Black Sea Grain Initiative, an agreement involving Russia, Ukraine, Turkey and the United Nations.

Its blockage was first reported on Twitter by Norwegian company Leth, a shipping agency for many vessels in the Suez Canal.

"M/V Glory grounded while joining Southbound convoy near to al-Qantara," it wrote in a brief message. "Suez Canal Authority tugs are currently trying to refloat the vessel."

However Leth later also reported that the ship "has been refloated by the Suez Canal Authority tugs".

It added that "21 vessels going southbound will commence/resume their transits. Only minor delays expected."

Incidents happen from time to time in the busy waterway.

September saw a brief blockage involving oil tanker Affinity V caused by "technical damage to the rudder" according to authorities.