A rave of their own: Egypt's women DJs creating inclusive dance floors 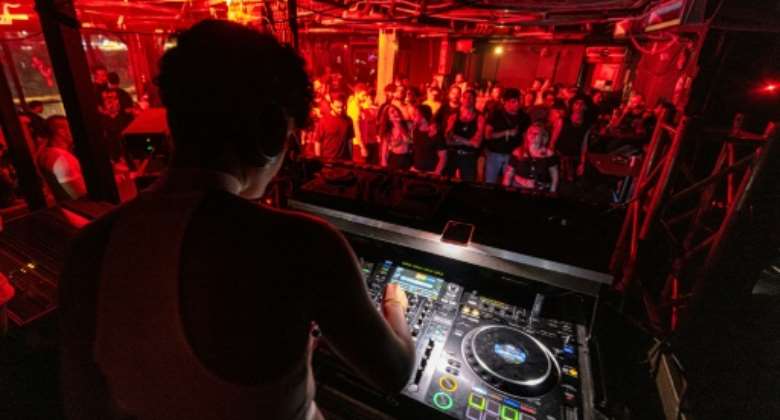 A generation of young women DJs are forging their own path in Egypt, seeking to create more inclusive spaces for performers and party-goers alike. By Khaled DESOUKI (AFP)

"All my life, I've seen men behind the decks," said party-goer Menna Shanab, 26, as psychedelic visuals reflected off the waters at the Nile-side venue.

"It's good to see the music scene evolving," said the young Cairo resident, decked out in fashionable streetwear.

Female party-goers for years have complained about harassment on the dance floor, while many revellers find mainstream venues too pricey.

Now, a generation of young women DJs are forging their own path, seeking to create more inclusive spaces for performers and party-goers alike.

A small but vibrant electronic music scene is "booming" in the Egyptian capital, according Yemeni music journalist and occasional DJ Hala K, asking like others AFP interviewed to be identified only by her stage name.

"A lot of female talents feel more confident and empowered to pursue DJing," the Amsterdam-based Hala K said by telephone.

Female party-goers for years have complained about harassment on the dance floor in Egypt. By Khaled DESOUKI (AFP)

Aspiring artists are taking inspiration from female DJs from the region, she added -- such as Palestinian Sama Abdulhadi, who has performed from Egypt to France and at premier US festival Coachella.

In Cairo, there are "powerful, talented women at the turntables: they know how to make people dance", Hala K said.

DJ and promoter A7ba-L-Jelly decided to establish her own collective as part of making the underground electronic dance music scene more inclusive.

DJ and promoter A7ba-L-Jelly decided to establish her own collective as part of making the underground electronic dance music scene more inclusive. By Khaled DESOUKI (AFP)

"I wanted to organise events where I would feel safe myself, without harassment," said the 32-year-old.

"I just wanted to go and party in peace."

More than 90 percent of women in Egypt aged between 18 and 39 said in 2019 that they had experienced some form of sexual harassment, according to the Arab Barometer public opinion research network.

"In some places in Egypt, where they play more commercial music... you won't enter because you are single, or because you don't look rich enough," A7ba-L-Jelly added.

"I book male and female DJs to create dance floors that are inclusive in terms of music, gender and social class," she said.

From the Nile-side dance venue, DJ Yas Meen Selectress complained that regardless of gender, "there are no dedicated spaces for us where we can play our music".

"Traditions, society and other factors mean that there are fewer women than men in the scene," Yas Meen Selectress added. Less than 20 percent of women are officially employed in the country of 104 million.

For the DJ in her late 20s, who lives between Cairo and New York, however, "to be only defined by one's gender is reductive".

For others like Dalia Hassan, it is a selling point.

DJ Yas Meen Selectress complained that regardless of gender, 'there are no dedicated spaces for us where we can play our music'. By Khaled DESOUKI (AFP)

Over the past two decades, she has made a name for herself playing at women-only events from Cairo to the Yemeni capital Sanaa and Riyadh in Saudi Arabia.

Hassan said she DJs at bachelorette parties, gender-segregated weddings and anywhere a female audience wants to "get dressed up and dance as they please".

Having a woman at the turntables allows other women to let loose -- "especially those who are veiled", she added.

"Female singers have always been well represented in the Arab cultural scene," she told AFP.

"The symbol par excellence of Egyptian music is still the mythical Umm Kalthoum," she added, referring to the 20th-century diva revered around the Arab world.

But "women are barely represented in the Egyptian electro scene of mahraganat, which is the most popular music today," she added.

Mahraganat relies heavily on computer-generated and synthesised beats and features blunt lyrics that tackle topics including love, power and money.

The country's musicians' union announced late last year it was abolishing the genre as part of a campaign to "preserve public taste".

Frederike Berje from Germany's Goethe-Institut in Cairo noted that Egypt's "music industry, especially the electronic scene, is heavily dependent on private initiatives and the commitment of individual artists".

Despite rising numbers of women DJs, however, it "remains dominated by men -- especially when it comes to production and management", she added.

‘Sidelined’ GIJ threatens to withdraw from UniMAC merger
19 minutes ago