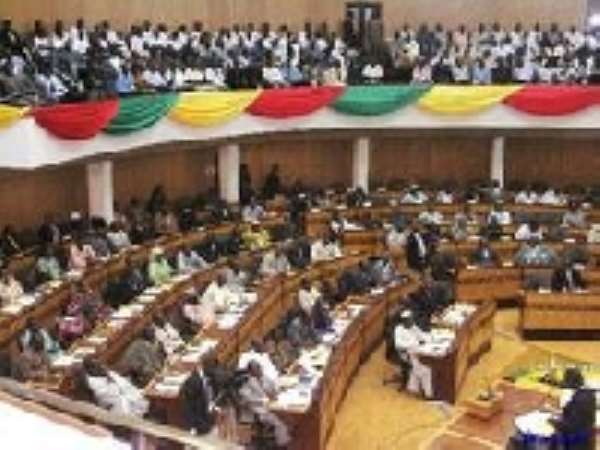 Members of Parliament have called on the leadership of the House to provide them with bodyguards and security at their residences.

They said the call had been necessitated by rampant thefts at their residences as well as threats to their lives.

The MPs who were debating the budgetary allocation for Parliament, said they had been living at the mercy of armed robbers and people who did not take kindly to their views on the floor of the House.

The MP for Ahafo-Ano South, Stephen Balado Manu who raised the matter in Parliament said as an interim measure, security ought to be provided at the MPs flats at Sakumono, where he said members were virtually living at the mercy of thieves.

He maintained that it wouldn't be out of place for MP's to be assigned police guards just as is done for Ministers. He said MPs stood a great danger of harm if for instance they spoke against the activities of chainsaw operators in their constituencies and the operators took offence and decided to harm them.

“It's a serious matter but because such a thing has never happened, we take things for granted.”

The House approved 219 billion cedis for the Office of Parliament. Other ministries and agencies whose allocations have been approved include the ministries of Energy, Tourism, Information and National Orientation as well as the Millennium Development Authority.

Meanwhile members of the public expressed mixed reactions to the MPs' call when they spoke to Joy News.

But those who opposed the view said there was no need for parliamentarians to be given bodyguards and security at their residences but rather efforts ought to be made at safeguarding the security of the entire public.