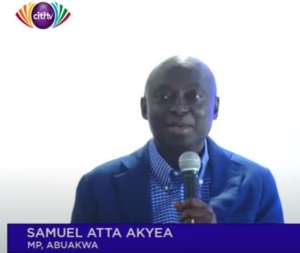 A former Minister of Works and Housing, Samuel Atta Akyea says the mentality of Ghanaians on electioneering which holds that politicians must dole out monies to them before they vote for them need to be changed.

Ghanaian politics is always characterised by monetisation, items, foods and in some instances, cars are given to voters in an effort to win their votes.

According to him, the masses mostly vote for candidates who are ready to give them money, observing that some voters are always in a hurry to vote for politicians who give out monies.

The Akim Abuakwa constituency legislator said some voters rarely consider the competencies of politicians before voting them into power, adding that money plays a major role in the electioneering process.

He called on stakeholders to look at electoral monetisation which has become a canker in the Ghanaian politics, fearing that competencies will always be replaced with mediocrity if the situation is not looked at.

The former Minister of Works and Housing added that the incompetent politicians who are voted by the masses because of their monies do not have much input in the nation-building, a situation he described as worrying.

He feared that the country will not have good government to rule its citizens if qualified politicians are not voted into power.

Contributing to a lecture on the 1992 Constitution on January 5, 2023, Mr. Atta Akyea indicated, “the only thing I have a challenge all the time is to just ignore the equation, is the masses, and the mentality of the masses. The Constitution is there to improve the people. But what is the mentality of the masses? That discussion is always absent. One of the things I see is that the people will have the government they want. As we are making this discussion, somebody believes that he/she will not vote you into power, unless you give me money. I’m about to help you, but, if you don’t pay the gate fee, I won’t open you to come and help me, it’s there, we should look at it.

“At the end of the day, the poverty of the poor is in their own poverty. The man who is not competent to help brings you a feel coins and get the power and he doesn’t have much input. so we should look at that dimension also. Because at the end of the day, if we don’t want to elect good people, we won’t have good government, that is my humble view. And good people should not be the ones saying I [they] have big ideas but my [their] pocket is not deep, so you will shut off all the good people who will come and practice the Constitution and prove the Constitution and improve the lives of the people, and the averages will go by raising of the coins to give to the masses and that area is my heart beat”.