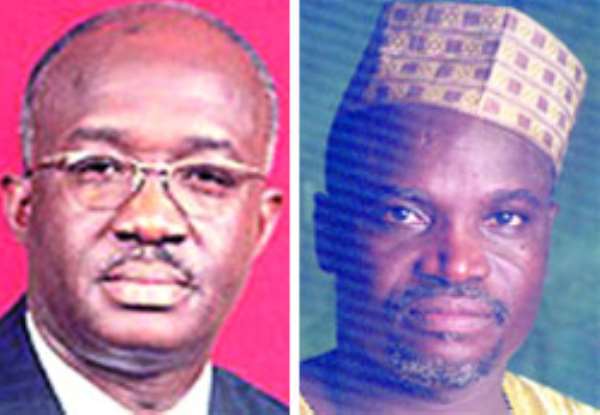 The Minority Spokesman on Energy, Moses Asaga yesterday took on the Minister of Energy in Parliament over crude oil liftings from the shores of Ghana, without the knowledge of Ghanaians.

Mr. Asaga, who sought to know from the Energy Minister, why Ghanaians had not been told how much oil was being lifted from the Saltpond Oil fields, since the signing of a production agreement among the Ghana National petroleum Corporation (GNPC), Government of Ghana and Lushann Eternit Energy Limited, a foreign consortium.

Asaga who said he was raising the alarm about the agreement in the house because of the secret nature that the deal had assumed, told The Chronicle in an interview that going by the daily production estimates of the well of 500 to 700 barrels a day, millions of dollars should accrue to the state. This, he said had not been disclosed to Parliament.

Mr. Asaga said after a thorough investigations into the activities and operations of the company, he gathered that the company's production was only known to the GNPC, which he said has failed to establish an oil revenue account.

When he first raised the issue at the committee level, Asaga says the Minister of Energy, Kofi Adda himself declined knowing of any such oil deal.

This set the tone for an argument in which the minister admitted not knowing the account into which revenues generated from the production was going to.

The Minister, after several exchanges, promised to set up a committee to investigate the deal.

Asaga stressed that from all indications, he realized the minister knew virtually nothing about the deal; hence the need to approach the finance minister to know where monies generated from the operations of the oil fields was being lodged.

The Minority Spokesman disclosed to The Chronicle that information available to him suggests that already there have been about 4 to 5 liftings from the field. He could also not tell the capacity of the oil tanker doing the liftings.

Mr. Asaga, a former employee of GNPC, said if indeed it was an internally generated fund, it should have appeared in the budget estimates of the Ministry of Energy and accounted for by GNPC.

He based his premise on raging issues in Nigeria where there have always been problems with accounts for revenues generated from the sales of the country's oil.

“No matter the modest production we are making, I thought that we should be transparent enough to let Ghanaians know the revenue we are making out of it,” he said.

He therefore called for investigations into the crude oil production and the account.

Under the Production Agreement among the parties (GNPC/Government of Ghana and Lushann), “All petroleum revenue accruing to the state shall be delivered to or paid into a government account designated by the minister.”

In the current circumstance where the minister claims not to be aware of the said agreement, Asaga says there is need to investigate the activities of the ongoing oil production.

Under the agreement, 3% of gross production of crude oil, royalties comes to the Government with a carried interest to GNPC, which has not been stated.

Ghanaians would recall that in or about 2003 a vessel load of crude oil produced from the same Saltpond Field under an agreement with Saltpond Oil Producing Company Limited whose ownership was traced to one Sintim Aboagye in joint venture agreement with the GNPC got missing from Ghana's territorial waters.

A search by the navy and other security agencies generated national interest and international concern. The Chronicle intelligence, however, has it that even though the crude oil was not taken far from our territories, it was on our blind side of certain officials Chronicle has launched extensive investigations into this project.

We’re passing a law to nib LGBTQI+ activities in the bud — B...
21 minutes ago