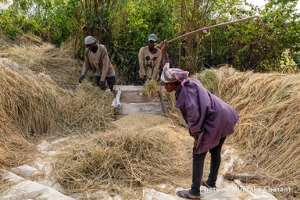 The Afadzato South Women Rice Growers Association in the Volta Region has bemoaned the lack of support from the government, saying it is a major setback to the activities of members.

The lack of equipment to harvest, thresh, winnow and mill the rice has resulted in the crop being left at the mercy of the weather, leading to post harvest losses, it said.

“The Government says it is making frantic efforts to ensure local rice consumption so as to reserve some foreign exchange, but its priority is unclear because rice farmers are finding it difficult to secure basic equipment to facilitate their work,” Ms Margaret Irene Saku, the President of the Association, said.

“When the rice gets overdried before harvesting, the milling process breaks it into pieces and it's very difficult to sell the broken rice, putting us at a loss.”

She said the farmers lacked combine harvesters to enhance their work, hence most of them engaged in manual harvesting and threshing, which was risky, time consuming and costly.

“One of my workers chopped of his finger while harvesting because the knives we use (sickle) are very sharp and the least mistake could have dire consequences.”

Margaret Irene Saku, pictured above, was the Best Female Farmer in Volta Region in 2022.

Madam Saku, also the Best 2022 Female Farmer, Volta Region, in an interview with the Ghana News Agency, said if government could provide at least two harvesters on credit to the Association, the farmers would be able to mill fresh and good quality grains for ready market, make good sales and income to enjoy the fruits of their labour.

Though there were arable lands, women rice farmers struggled to obtain fertilizer, ready market and other basic equipment to produce on large scale to feed the nation.

Madam Saku claimed that government had distributed about 1000 combine harvesters to farmers nationwide but was not aware whether the Volta Region benefitted.

For Ghana to stop rice importation, the Government must support farmers across board with the necessary equipment, including festilizers and harvesters, to improve on their work, she said.

Mr Stanley Adafia, a rice farmer, said he lost about 15 acres of the grain due to irregular rainfall patterns as a result of climate change.

He noted that government held conferences to formulate policies on rice production, but the real farmers were hardly invited to make inputs.

“It is important that rice farmers are supported with simple processing machines at affordable prices to help reduce their stress and contribute better to the national food basket.”

Mr Benson Atiglah, the Executive Director of the Accelerated Rural Development Organisation, a non-governmental group focusing on rural development and forest conservation, said the lack of harvesters at Golokwati affected productivity and, thus, pleaded with the Government to go to the aid of rice farmers in the area.

“It takes about five days for three farmers to gather, thresh and winnow one hectare of land, compared to about one hour for a combine harvester to do the same job,” he explained.

A worker uses a sickle to harvest rice at Golokwati.

Mr Muntaka Chasant, a researcher and environmental activist, who visited Golokwati to document the issues raised by the farmers, said rice production in the Volta Region was at risk due to drought and temperature variability, an example of the effects of climate change.

Extreme weather patterns such as drought and high temperatures, fuelled by climate change, were known to affect yield potentials in rainfed rice production areas like Golokwati, he said.

To make matters worse, the farmers now manually harvested large hectares of rice fields with sickles, taking days and weeks on end, instead of a few hours if they had mechanised harvesters.

“This has very serious implications for food security. We are all encouraging the consumption of locally produced rice. The Minister of Finance was recently in the news for expressing shock at Ukraine's impressive grain export despite its conflict with Russia,” Mr Chasant said.

“How would Ghanaian farmers get their products to the markets if they spent weeks using a sickle to harvest the paddy fields and wooden planks to thresh when it takes hours or days with modern machinery?” he asked.

“Farmers do so much for Ghana yet receive very little reward.”