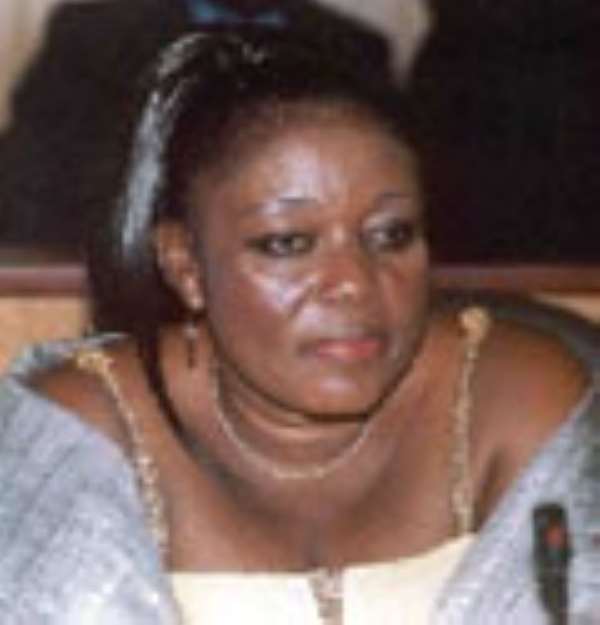 Party activists rage but chairman restrains them
Some aggrieved party activists of the New Patriotic Party (NPP) in the Cape Coast Constituency have accused the Member of Parliament (MP) for the area, Ms. Christine Churcher, of hijacking a vehicle meant for the constituency.

This, according them was making movement of constituency executives very difficult especially when it comes to mobilizing party activities for programmes necessary to strengthen the party. According to Chronicle's investigations, the MP, who used the vehicle for her 2004 campaigns, has since not returned the vehicle to the party in the constituency, and thus kept both activists and executives in unpleasant straits.

The Constituency Organiser, Baba Musa, told The Chronicle that after the 2004 elections, all the NPP MPs were asked to return party vehicles they used for their campaigns to the executives in the various constituencies. He said most MP had since complied with the directive but their MP has failed to do same.

The Cape Coast Constituency Chairman, Mr. Ebo Hutchful, alias “Oguaa Akoto,” told the paper that it was true that the MP had hijacked the vehicle and that they had written a letter to the Regional Chairman, Mr. Bootey Danquah Smith, to help them retrieve the car.

He said he had to use his personal vehicle for party activities anytime the party was to mobilise its members adding that it did not augur well for Cape Coast, which he described as the nerve centre of politics in Ghana, to be denied such opportunity of having its own party vehicle. Mr. Danquah Smith, on the other hand, told the paper that he had received the letter from the constituency executives informing him about the behaviour of the MP. The regional Chairman said the regional executives had taken notice of the letter and was working around the clock to address the issue.

He said there were reports of a case involving certain parties within the constituency in Cape Coast which is purported to have landed in the court. Mr. Smith said after the court case has been settled, the vehicle will be handed over to the party executives.

He expressed concern about the way some NPP activists in Cape Coast treated Ms Churcher and explained that she was being treated as if she was not a member of the party and called on those people to stop meting out such treatment to her. Meanwhile, the special aide to the MP, Mr. Kweku Filson, told the paper that he could not talk on the issue since he had no knowledge of the hijacking of any 'high jacking' as was being speculated among NPP members in the ancient capital.

Earlier Chronicle authoritatively reported about Ms. Churcher's adamant refusal to return her official vehicles when officials from the Protocol department contacted her for the two cars she used while she remained the Minister of Environment and Science until she was ignominiously removed from office without any advance notice whatsoever.

She was attending an official conference with her deputy, Mr. Gambilla, the former Deputy Minister of Finance. The conference attracted several Ministers and top officials from Governments in other African and commonwealth countries, and with one fell swoop, they both had the chairs of office pulled from under them.

Ms. Churcher has never spoken about the issue in public though her silence, and subsequent refusal to hand over the vehicles has given room to speculations that she was contemplating quitting as MP of Cape Coast and force a bye-election, a position that a pro-NDC tabloid, The Lens published and attracted widespread controversy. The Minister then visiting London spoke to the issue on one London's Ghanaian owned FM stations and denied speculations that she is contemplating stepping down as MP.

On the grounds however, her constituents are disappointed with her as she has not visited the constituency as she used to when she was first elected. Meanwhile the current Presiding Member of the Cape Assembly, 32 year Edwin Buckman who challenged her for the seat and backed down upon persuasion from Pesident Kufuor and party kingpins like Nana Awuku has been unofficially been touted as the shoo in for the office. He is the current Youth Organiser of the NPP and has been its most effective spokesman both on radio discussions and party meetings but still remains unresourced by the party.

Ms. Churcher is not known to have a house of her own in Cape Coast and this may have accounted for her reluctance to be visiting as she usually squats with friends and family at Mfantsipim area when she was running for the seat and left a solid record of accountable, corruption-free governance while in office as MP.