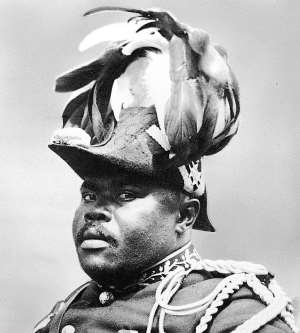 Marcus Garvey, though with no spirito-cultural foregrounding in Afrikan-Centredness, was, in no uncertain terms, a racial exclusionist/separatist, and definitely not a Pan-Africanist!!! It is an ahistorical assertion to say he was a Pan-Africanist, given the apologism and mediocrity that plagued the pioneers of the ideology called Pan-Africanism.

I call this kind of revisionism, intellectual subversion and falsification of history!

All the Pan-Afrikanist and Black Consciousness "struggle icons" who feature in the mainstream knowledge and information sharing outlets had white handlers/softners/tamers. All these men envisioned some humanity melting pot as the output end of our liberation struggle, and not a sovereign, independent, structurally and institutionally autonomous Afrikan world that is unapologetically and exclusively Afrikan-ruled and participated, under which all others (non-Afrikans) can come as guests. This is what any sensible Self-determining and Self-ruling Nation in the world does. I realised I've actually been trying to make Pan-Afrikanism and Black Consciousness say what I wish them to say. When you're called anti-white bigots by Pan-Afrikanists and Black Consciousness adherents, you should know you have just had a slap on your head to sober you up from a phenomena of illusions. I am not only for Afrikan liberation, I'm also for an exclusively Afrikan rule on Afrikan Soil. And by Afrikan I mean people of your and my phenotype. This is Black Nationalism!

'HOW THE "FATHER OF PAN-AFRICANISM" W.E.B DUBOIS RESPONDED TO BLACK NATIONALISM, AS ANNOTATED BY GARVEY'

While W. E. B. Du Bois felt that the Black Star Line was "original and promising", he added that "Marcus Garvey is, without doubt, the most dangerous enemy of the Negro race in America and in the world. He is either a lunatic or a traitor." Du Bois considered Garvey's program of complete separation a capitulation to white supremacy; a tacit admission that Blacks could never be equal to Whites. Noting how popular the idea was with racist thinkers and politicians, Du Bois feared that Garvey threatened the gains made by his own movement.

- "The Collapse of the Only Thing in the Garvey Movement Which Was Original or Promising", retrieved 2 November 2007

GARVEY'S 'PAN-NEGROISM'
Marcus Garvey was phenotypically specific when he referred to Africans, hence his use of the term 'negro' for emphasis.But in the traditional BC/PA lexicography, both 'Black' and 'African' are plagued with hybridity. Their inclusivity to Arabs and Indians attests to my assertion. We can be sure of the fact that no Indian or Arab was called 'Negro', we unambiguously know the phenotype Garvey referred to. Garvey was not an intellectual victim of an a priori African continentalism that's ecunimical to Arabs and Indians, and at worst, whites, in some "BC/PA political cubicles"

Nkadimeng Dlamini says; "The genealogy of Pan Africanism can be traced to Sylvester Williams. He established the Pan African Congress which had about 150 whites sympathisers as honorary members. From this we can see that the defining feature of PA from its inception was its integrationist impulses. The movement was later patronised by the likes of DuBois, CLR James, George Padmore etc. On the other hand, a parallel movement was underway. That led by Marcus Garvey. This was an exclusively blacks only movement. To be sure, Garvey distanced himself from Pan Africanists and identified himself as a Negro Nationalist. Of all the Pan-African congresses organised and attended by the likes of Williams, DuBois, Padmore, CLR James etc, Garvey was never part of them. He was always viewed as an arch rival of pan Africanists with his Black Nationalism."

We can’t continue defending your corrupt deals on empty stom...
7 minutes ago

Claim Mahama is behind Haruna Iddrisu’s removal as Minority ...
7 minutes ago