Shares in troubled Kenya Airways suspended for another year 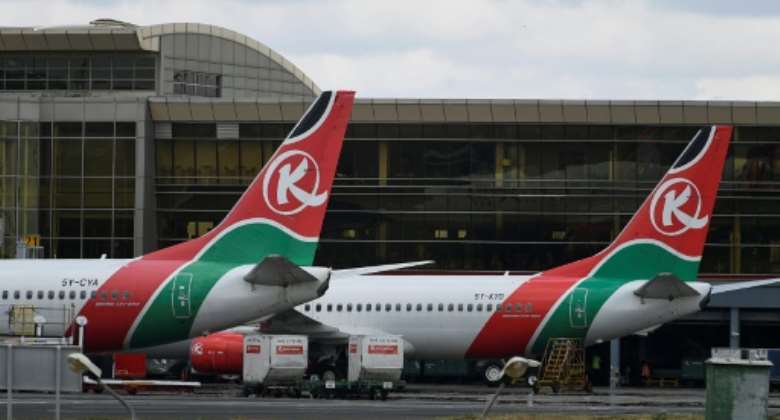 Kenya Airways was hit by a pilots' strike in November. By Simon MAINA (AFP/File)

Trading in Kenya Airways shares has been suspended for another year, the local stock exchange said Wednesday, as the troubled national carrier battles to return to profitability.

Last month, Kenyan President William Ruto said the government was ready to sell its entire stake in the airline, which has been languishing deep in the red for years.

Kenya Airways shares have been suspended since July 2020, in the midst of the Covid-19 pandemic that devastated global air travel.

"The extension of suspension seeks to enable the company (to) complete its operational and corporate restructure process," the Nairobi Securities Exchange said in a statement.

The government owns a 48.9 percent stake in Kenya Airways, while Air France-KLM has 7.8 percent.

"I'm willing to sell the whole of Kenya Airways," Ruto told Bloomberg News last month during his first visit to the United States as Kenyan president.

"I'm not in the business of running an airline that just has a Kenyan flag, that's not my business," said Ruto, who reportedly met executives from US carrier Delta Air Lines during the trip.

Kenya Airways' woes were exacerbated in November when pilots staged a days-long strike that led to hundreds of flight cancellations and thousands of passengers stranded.

Kenya Airways shares were first suspended in 2020 as lawmakers were considering a plan -- since dropped -- for the state to take full ownership of the carrier.

The airline, whose slogan is "The Pride of Africa", was founded in 1977 following the demise of East African Airways and now flies more than four million passengers to 42 destinations annually.

But it not made a profit since 2012, and the government has pumped in millions of dollars to keep it afloat.

Last month, in announcing a new $447 million loan for Kenya under a 38-month aid programme, the International Monetary Fund called for progress on structural reforms in the East African country.

The IMF highlighted that "addressing vulnerabilities" at Kenya Airways as well as the majority state-owned utility Kenya Power was "urgent".

In August, the airline reported a $81.5 million half-year loss citing high fuel costs, though this was a marked improvement on the $94.6 million loss in the period the year before.

Local media reports, citing a letter from Treasury Cabinet Secretary Njuguna Ndung'u to the IMF at the end of December, said Kenya Airways would get an additional state bailout of about $280 million in a mini-budget expected this month.