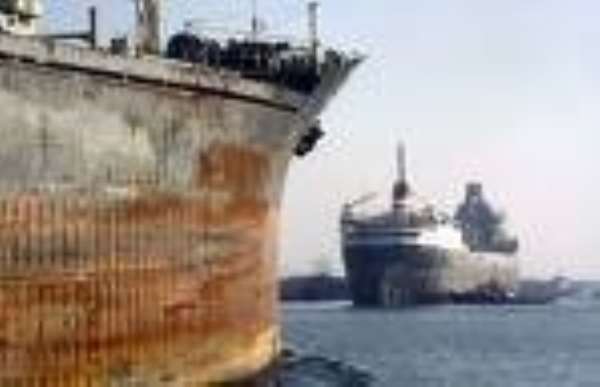 A Principal Scientific Officer of the Ghana Standard Board (GSB) on Tuesday told an Accra Fast Track High Court that 25 slabs of parcels of powdery substances tested positive of cocaine.

They were allegedly found on the MV Benjamin vessel, which carried the controversial missing 77 parcels of cocaine.

Mr James Koligu Atika said when the substance was brought in nothing was mentioned about the MV Benjamin Vessel.

He was testifying in the case in which Kwabena Amaning, alias Tagor and Alhaji Issah Abbas were being held for alleged drug-related offences.

Tagor and Abass, who were arrested after testifying at the Georgina Wood Committee, were remanded into Police custody last Monday when they appeared before the Fast Track High Court.

The two, who are alleged self-confessed drug barons, are jointly charged for conspiracy.

They have pleaded not guilty.

Tendering the report into evidence Mr Atika said the samples were brought by one Detective Corporal Edward Yaw Asante of the Narcotics Control Board.

But Mr Ellis Owusu Fordjour, Counsel for Tagor, objected to the tendering of the report saying the 25 slabs of the substance had no reference in relation to the charge sheet of the accused persons.

On the charge sheet of the accused persons, the Prosecution mentioned 30 slaps of cocaine.

Mr Fordjour said the second page of the report bore the case title of Philip Bruce Arhin and five others.

"I suspect either the case is on trial or to be tried later on. The report has no relevance to the issues before the Court.

He indicated further that the expertise of the third Prosecution Witness had not been gazetted.

Mr Mohammed Attah, who represented Issah, also objected to tendering of the report declaring that Prosecution did not lay enough grounds before tendering the said report.

Mr Attah drew the Court's attention to the fact that Mr Atika had told the Court that he did not work in relation to the MV Benjamin vessel.

He said Mr Atika's evidence did not tally with the Second Prosecution Witness, Detective Corporal Edward Yaw Asante's evidence that indicated that 30 slabs were found on the MV Benjamin vessel.

Prosecuting Mr William Kpobi, Principal State Attorney, opposed the objection saying the Witness did not need any high credentials to become an expert in his profession.

He said the law makes room for samples of some substance to be sent to the laboratory.

The Court overruled defence Counsel's objection and admitted the report into evidence.

During cross-examination by Mr Fordjour; Mr Atika indicated that the substance was received by GSB officer on July 26, 2006.

He maintained that 25 slabs were brought to the GSB for testing.

Mr Atika admitted that he did not conduct the test on the samples himself but as the head of a unit with the GSB, the report was forwarded to him.

Mr Prince Kumi Archer, a Businessman, mounted the witness box and told the Court that he sold his house situated at Adjiringanor, near East Legon to one Nana Kofi, a driver of Tagor for 110,000 Euros.

He said soon after that he saw a publication in the “Daily Guide” and his name was mentioned.

Mr Archer said he had sold the house two years then and the monies were paid in instalments within two to three months.

During a cross-examination by Mr Forjour, he said he did not know the occupation of the said Nana Kofi.

The case of the Prosecution is that the accused are self-confessed drug barons, who since 2004 have been actively engaged in activities of promoting and establishing various enterprises relating to narcotic drugs.

In the process, the accused persons purchased, supplied, paid and credited the drugs, which they further distributed outside and within the country.

The Prosecution said on April 26, 2006, MV Benjamin anchored in Tema breakwaters with 77 parcels of cocaine.

However, 76 parcels were offloaded into two canoes, which landed at the Kpone Beach in the Greater Accra Region.

The Prosecution said the news of the 76 parcels got to people of the underworld and even the security agencies also had wind of it.

Assistant Commissioner of Police (ACP) Kofi Boakye invited them to a meeting in his house at Kanda in relation with the missing cocaine.

At that meeting, the accused persons voluntarily confessed to their dealings in narcotic business and even boasted openly of previous activities.

The accused in the process also confessed openly that they had purchased drugs, supplied, credited and distributed drugs outside.

The accused at ACP Kofi Boakye's house also agreed to locate the 76 parcels of cocaine seized and to share it in furtherance of their business because the quantity of cocaine brought in by the MV Benjamin was too much for one person to enjoy.

The Government set up the Georgina Wood Committee to investigate some cocaine-related cases including the MV Benjamin case and alleged bribery of Senior Police Officers in a 588 kilos of the drug seized from some Venezuelans at East Legon in Accra.

The case was adjourned to January 16, 2007 at the instance of Prosecution.