We Are The Voice And We Won’t Sit In Silence, Coalition Of National Youth Organizers New Year Message To Government 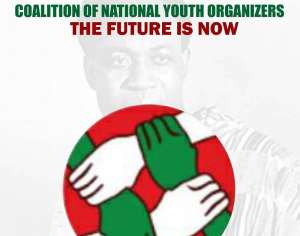 The Coalition of National Youth Organizers wishes every Ghanaian a Merry Christmas and a very Hopeful New Year.

2022 like every year Under this 4th Republic has been nothing but another show of incompetence and lack of vision to make Ghana work again by the government in power.

This has been observed with each government Entering and exiting one IMF program of some sort.

These IMF sanctioned programs which come with its own conditionalities has over the years brought nothing but untold hardship to innocent Ghanaians.

The first rule of the IMF has always been to *"Cut down government wage bill, Raise enough Revenue"!*

This has always been the rule of the IMF since its establishment,moreover, it has never helped countries with huge unemployed citizens who are mostly Youth and underpaid Citizens.

Unfortunately, the mismanagement of Ghana's economy led by Nana Akufo-Addo government is characterized with reckless expenditure, maintaining a huge government size, fiscal indiscipline, excessive borrowing with ridiculous promised coupon rates in some case among countless others, has made the coming year very gloomy.

Why is government not employing anyone in public offices when we still have a deficit when it comes to public staff?

Where are the 1D1F which the people of Ghana were told that they have shares in based on a PPP agreement?

Why is the Ghanaian whose minimum wage only buys a loaf of bread be overly taxed whiles his salary remains the same?

How can you fight corruption when the public worker is underpaid and heavily taxed?

Is it because that is an IMF Instruction?
Have we forgotten Osagyefo's prophecy of NEOCOLONIALISM being the LAST of IMPERIALISM?

Can Ghana claim to be *ECONOMICALLY* free* today?

Can the government of Ghana claim Sovereignty on behalf of the people of Ghana with our current economy running on Eurobonds and IMF micromanage Economy?

To the youth of this country, we are sorry to tell you the hardest truth, however this government like its predecessors have FAILED US YET AGAIN!

Our budget statement makes it clear that 2023 will be a very difficult year.

With investors receiving zero interest on their investments more so getting stiff head cuts yet government is only looking forward to downsizing the public sector without hiring.

With disbanded unemployed graduates, sacked NABCo trainees, YEA recruits especially those who were in community policing, unpaid Youth in afforestation among others...

It is going to be the Survivor of the Fittest, the Swiftest among the Crooks and mercy of the poor in the hands of the most Corrupt.

In the midst of all these, we will solidarlize with you as galant youth of this country, however urging you not to involve yourselves in any deviant character or behaviours as we The Coalition of National Youth Organizers keep fighting for yourself interest.

Like their children who they keep empowering, enriching, giving free fuels, and allowances, placing them in high public offices and giving them better education, we equally deserve better!

For we are also someone's children and citizens of Ghana, so we are not going to sit in silence neither are we going to live in fear! In fighting for equality for all.