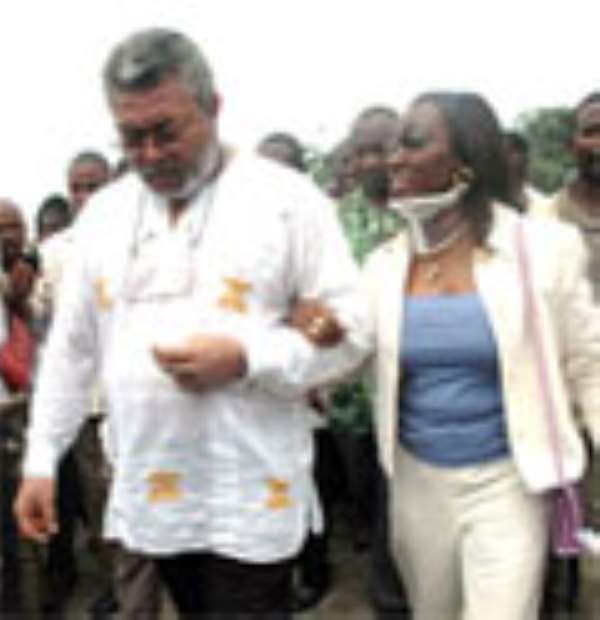 The Former First Lady, Nana Konadu Agyeman Rawlings yesterday, rained a barrage of insults on President Kufuor and his ministers, describing them as serial liars and cocaine dealers.

Rounding up a rally organised by the opposition National Democratic Congress (NDC) to introduce the party's presidential aspirants to party supporters at Bukom Square in Accra, Nana Konadu, who spoke Twi, bluntly told the gathering that President Kufuor and his team of ministers had consistently hidden the truth about what she described as, “bad governance” from the populace.

“Kufuor and his New Patriotic Party (NPP) Administration have always lied to the people of this country; all they know is to lie, and lie and lie.

“What you and I can do to stop their treacherous rule is to vote them out in the next general elections.” She branded Hon. Kwamena Bartels, Minister of Information and National Orientation, particularly as a popular serial liar, who always possessed privy documents “full of lies”.

According to Mrs. Rawlings, Hon. Bartels, as well the Member of Parliament for Ablekuma North, “always holds his documents firmly, and does not allow anyone to sight them, because they are full of lies.”

Commenting on court suits heaped on her, she said she was not a thief as alleged by her accusers, stressing, “I'm not a thief, President Kufuor is rather the thief.”

Flanked by her husband, former President Jerry John Rawlings, and leading party members including General Secretary, Johnson Asiedu Nketiah, Nana Konadu called on the rank and file of NDC to unite for total victory in 2008. As usual, cheers of “Eye Zu, eye Zu” were chanted by party sympathisers when Rawlings personally mounted the podium to invite speakers for the rally.

Yesterday's rally formed part of activities being prepared by the party ahead of its national delegates' congress slated for December 21. About 2,500 delegates are expected to throng the campus of the University of Ghana, Legon for the congress.