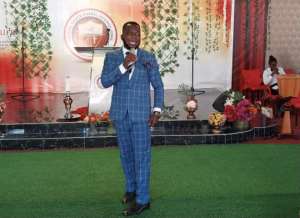 Rev. Patrick Biney, an associate overseer of the Crystal Grace Chapel International has educated Christians on the importance of the birth of Christ.

The preacher says Christianity is an ambassadorial role that seeks to sell the good news of God.

The revered man of God, in his sermon on Christmas Sunday, December 25, described Christians as "duplicates of Christ," charging them to continue the works of their maker by pushing the gospel to every part of the world.

"You are a duplicate of Christ, so go out there and keep on spreading his word to many gentiles and bringing them under his light," he preached.

In a sermon titled "Emmanuel," Rev. Biney explained the incomprehensible powers of God, particularly why He is called Emmanuel.

According to the astute preacher, the name Emmanuel signifies two most powerful characteristics of God, namely transcendence and immanence.

Transcendent, he explained, is the state where the universe or whatever thing created by God cannot contain Him. Meaning God doesn't stay anywhere, either in the heavens or on earth, but is still lives with his creation.

On the contrary, the same God, who can't be contained by anything he created, lives in them, which is the state of being present and involved in his creation by way of immanence, according to Rev. Biney.

He then advised Christians to make it a priority to get close to their maker so that they would experience his mercies in their lives.