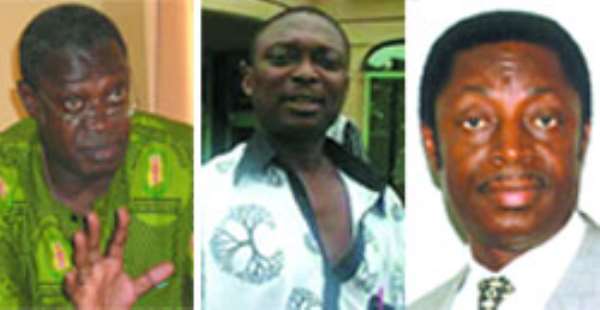 THE first hint of the resurgence of the haemorrhaging Convention People's Party (CPP) filtered through yesterday when die hard CPP loyalist, Mr. K. Amoah Awuah, the acting chairman of the party, issued a statement rousing the millions of Ghanaians with CPP inclinations to get up, gird their loins and identify with what he called positive action, a battle cry of the party which is rooted in folklore for its organisational prowess.
Mr. Awuah's statement called on members and sleepers to 'wake up to invigorate the CPP towards elections in 2008.

Mr. Awuah noted in his statement that the Council of the CPP defined “Positive Action” as a legitimate and non-violent expression of political activists' power to redress and stop internal decay, backbiting, rancour and lack of operational direction by the leadership of the party,” urging the rank and file of the party to heed the clarion call for Positive Actions and deem it as a justifiable clarion call for action in all affairs of the Party.

The CPP Council also lauded the organisational timetable issued by 'The Patriots', a pressure group within the Party, which called on the leadership to immediately launch a programme for wards elections by February 2007, to be followed by Constituency elections in March 2007.

What has generated excitement among CPP adherents is the real possibility that they can reclaim a significant role in the elections of 2008, easily shutting out the Obed Asamoah formed DFP which has a sole agenda, the emasculation of the NDC by hook or crook and an executive top heavy with failed politicians with dubious political antecedents and linkages with the seedier part of the PNDC/NDC government.

Curiously, most of the private newspaper editors who have been shoring up both the New Patriotic Party (NPP) or the National Democratic Congress belong to the CPP or identify with Nkrumahism. Messrs. Kwesi Pratt, Kweku Baako, Egbert Faibille, Osbert Lartey are among these Nkrumahists.

The prospect of them running to the corner of their mother party poses a serious threat to the fortunes of the two main parties who rely on them for dissemination of information and propaganda.

More interesting, is the quality of candidates that are being considered for the top positions. They include a serving Supreme Court Judge who may be persuaded to resign for the job, and three other exciting candidates whose stature are comparable to the best that the NPP or NDC can throw up.

However, he is now somehow ostracised by the CPP because of claims by some of his critics that he is too deeply embedded with the NPP.

Dr. Kwabena Dufuor, the former Governor of the Bank of Ghana is quietly piling up points with his behind the scenes support of the CPP and active participation in CPP affairs, having built a reasonable war chest to take on all comers for a contest.

But probably the most outstanding personality is Mampong Ashanti born son of the late showboy with nearly 90 children, DC Badu, the Professor of medicine, Badu Akosa,53, an orator who can make NDC's golden boy Spio Garbrah sweat in a debate.

Among the CPP's tough brigade can be found fire eaters like Mr. Bright Akwettey and Russia trained Vladimir Antwi Danso, former Dean of Student at the University of Ghana and currently a respected fellow at the Legon Centre for International Affairs.

And Chronicle intelligence has picked up suggestions that Mr, Kwaku Baako, the most effective Spokesman for the NPP, will be retracing his steps to the CPP soon and join in the consolidation of the greatest political war machine since Adolf Hitler's dritte reich.

With Badu Akosah, quietly contributing his quota to the nation in the area of health delivery, the Medical School professor last week gave clear hints of being available to be coaxed to mount a challenge for the office of president when he announced recently that he will be quitting office by the end of the year.

The Patriots which has always regarded the self-effacing Badu Akosa as their man, had called for regional executive elections to be held by the end of April 2007, to set the pace for the National Delegates' Congress in June 2007 to select a presidential candidate and also to build a quality leadership team capable of supporting and marketing the flagbearer.

The biggest challenge may still come from Mr. Aggudey, who single-handedly kept the CPP name alive with the erection of multi billion worth of billboards all over the country. He has given clear indications that he is going to run for President, and it is reckoned that, this will be a titanic slug.

With the prospect of the 2008 presidential elections clearly threatening to be very close between the two leading parties, the CPP's potential to pull substantial votes is not in doubt, any will definitely determine which of the two parties form the next government as it is impossible for any of the two to win more than 50 percent of the votes required to form the next government.

The party's council however have said that, for the plan to take off their proposal and timetable for internal party elections is a reasonable proposal and an obvious expression of loyalty and show of concern for the Party, even though it is the wish of the Council that the National Delegates Congress be held earlier --March or April, 2007 rather than June as proposed by The Patriots.

The Council therefore appealed to the Central Committee of the Party to organise a meeting to discuss apparent inherent problems, including that of finance.

It also called on the Central Committee to immediately enact regulations to govern and direct the selection, vetting and election of a presidential candidate in accordance with Article 72 of the CPP Constitution.

According to the Council, such a directive would stop "the menace and unruly, disrespectful behaviour of some of the aspiring presidential candidates and instil party discipline."

"Alongside such a plan, we expect the Party Leadership to launch a detailed organizational scheme that should include all the relevant elements, namely the structures, systems and procedures designed to guide the new set of leadership teams across the country after the elections for efficient politicking," the Council stated.