Re: The Intriguing Story of How Akatsi Obtained Its Name 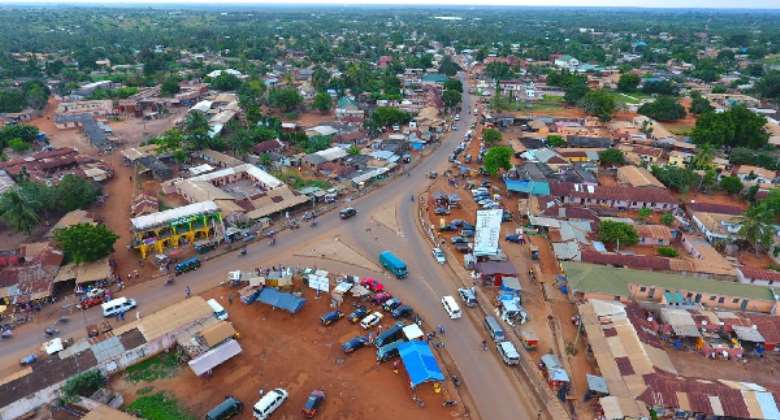 I have read Mr Ameza’s article titled ’The Intriguing story of how Akatsi got its name’ on many news websites. On 10th December 2022, Ghanaweb also published it. In the narrative, Mr Ameza made a concerted effort to explain how the name Akatsi came to be, however he erroneously stated that the town was formerly known as Monenu which basically means four junctions. He further claimed that the name Akatsi came about as a result of traders who came to Monenu to transact business but were unable to return home, they postponed their departure to date.

In fact, this is not the first instance that I have heard of this false and malicious misrepresentation of historical events. By propagating this incorrect and baseless narrative, revisionist historians are not only doing a significant damage to the young people of Avenor, but also to the larger community of Ewe speakers.

According to Goebbone’s theory on lies, if you tell a lie big enough and keep repeating it, ultimately people will begin to believe it as the truth. As such, the correction of this historical inaccuracies become necessary because just as Jerusalem is to the Israelites, so also Akatsi is to the Torgbui Letsa Korba’s lineage. However, to the strangers, just like Mr Ameza, Akatsi is a name of a market town in Volta region. And to the people who are the direct descendants of Torgbui Letsa Korba, that name Akatsi evokes the memories and the spirits of their ancestors as well as the boldness and valour they demonstrated to defeat and vanquish their enemies and grant them the chance to have a place where they now call home.

Historically, Akatsi is a name of a deity currently situated in a sacred grove directly behind the Akatsi Training College, between the low-cost housing unit at Akatsi-Afeyime presently known as Akatsi- Anyidzime and Akatsi, which was later known as Gago korpe and presently called Akatsi - Anyieme. In that grove, is a shrine where the deity is kept. The name of that shrine is called Akatsi-fe and the priest is called Akatsi-shi. Annually, the twin villages thus the present day Akatsi - Anyiedzime and Akatsi - Anyieme performed rituals at the shrine to appease the Akatsi deity. This event used to be a big festival till the last Akatsi–Shi, known in private life as Miheso Gago, passed away in the early 1980’s, bringing the celebration to a temporary halt. This festival takes place in lieu of Nyigbla rituals at Afife and it has a set day in the year. Drumming and all other loud noises are prohibited before the celebration across all the territories of Torgbui Letsa Korba which he acquired through conquest. During the celebration, elders keep vigil in the grove, drum, dance and offer animals as sacrifice to the deity Akatsi for his protection.

According to oral and written historical records, the prominent and well-known hunter Torgbui Letsa Korba, who was the son of Torgbui Teteh Gefu, was from a village called Korvenu, near Avenorpeme, and were all descendants of Torgbui Aduiadui, the founder of Dzevie clan.

Even though the specific date of when Letsa Korba lived at Korvemonu is unknown, it is also thought to be in the late 17th century. In fact, Amenumey (1968) acknowledged that when he stated that unlike the ancient Greek, the ewes did not form a single political entity in their new homeland but split into a number of sub tribes, chiefdoms, or paramountcies, each politically independent of the other, but all consenting that they were fundamentally one people.

As a renowned hunter, he fought many wars in the region including the 1679 Akwamu war. After the wars, Korba decided to acquire a territory for himself to practice his hunting trade. He then made his way northward into the forest areas where he had to battle with the wild animals, the enemies and the forest beasts. Korba finally emerged victorious by conquering a vast forest region which spanned from Xavi to Ziope. He shared borders with the Tordzi river in the west and the Worwoe river banks to the north.

As fate would have it, one day Korba left home again for his hunting expedition but did not return. A search party was conducted at his newly acquired territory. During the search, Torgbui Letsa Korba was found deaf and damp under a tree, with a clay curd pot on his head, in the curd pot was the deity Akatsi, at a place that is now known as Agorti sime which is directly opposite Cheap House store. After a series of rituals with the great hunters, the deity requested to be housed at its present home located behind the Akatsi Training College, between Akatsi Afeyime and Akatsi as they were known and called in those days.

Due to the vast nature of Letsa Korba’s possessions, he decided to protect his territory by constructing a new settlement for himself at the centre of his acquisitions and named the new settlement Akatsi, which was also closer to his deity Akatsi. His new settlement was later known as Akatsi - Gago Korpe and presently known as Akatsi - Anyieme. He then strategically re-located his eldest son, Torgbui Keteku to the northern part of his acquisition thus Lofortui and installed him on the stool that he (Korba) obtained from the war. Additionally, Korba gave birth to six females and has allocated land to all his son-in-laws, family members and friends around his turf. These places were known back then as suburbs of Akatsi. For instance, Mornenu which Mr Ameza copiously made reference to was known as Agbanyo Korpe and it predates John Millar’s construction company that constructed the Accra - Aflao Road. In fact, at Akatsi, John Millar requested from Torgbui Letsa Korba family for a place where his construction equipment’s could be kept. The present day Akatsi Training College was given to him and he constructed wooden structures there which still exist. Apart from Agbanyo Korpe which is now known as Monenu, there are other suburbs of Akatsi such as Nusenu korpe which is now known as Akpaku korpe, Vivor korpe now known as Efui korpe, Tatorme and Afeyime which is also known and called Anyidzime. All these villages existed before John Millar constructed the high way. As such to say, Monenu predates Akatsi is utterly absurd to say the least. As a result, it is unacceptable for revisionist historians to continue distorting the facts in spite of all the physical evidence and the historical facts.