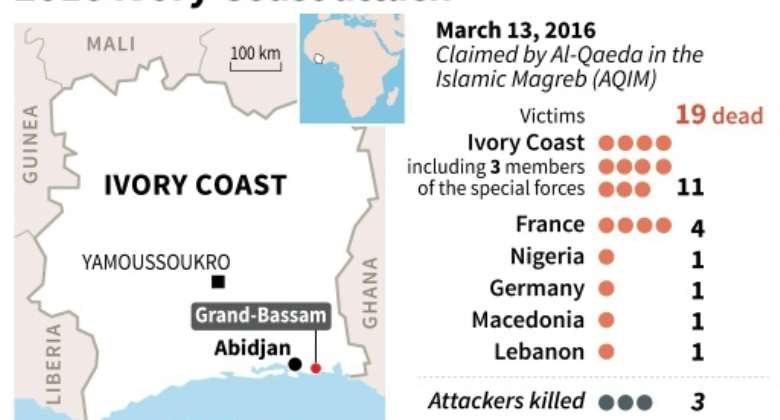 An Ivory Coast prosecutor Wednesday urged life in jail for four suspects over one of West Africa's bloodiest jihadist attacks -- a 2016 machine-gun assault on a beach resort that killed 19.

State prosecutor Richard Adou demanded a life sentence for the four defendants present at a trial that started last month over the attack, saying it would be "an exemplary and dissuasive punishment".

He also asked for life for 14 other suspects being tried in absentia, including the suspected masterminds of the assault.

They are either on the run or being held in neighbouring Mali.

All 18 stand accused of acts of terrorism, murder, attempted murder, criminal concealment, illegal possession of firearms and ammunition "and complicity in these deeds".

In an operation echoing a jihadist massacre the previous year in Tunisia, the trio stormed the beach and then attacked several hotels and restaurants.

The four actually present in court are suspected of being accomplices in the assault, including by helping its masterminds to gather information before it.

The 19 people killed included nine Ivorians, four French citizens, a Lebanese, a German, a Macedonian, a Malian, a Nigerian and a person who could not be identified.

‘Sidelined’ GIJ threatens to withdraw from UniMAC merger
18 minutes ago