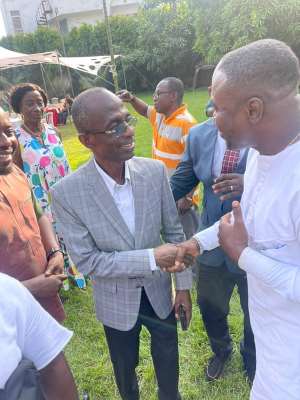 NDC China sends its rapturous congratulation message to all the elected national executives. The 10th Delegates Congress which ended yesterday was peaceful and successful. Instructively, is the collective unison voice from the delegates that manifested in the election of new national executives. This is the joy of the Congress.

The election of Chairman Johnson Asiedu Nketiah, General Secretary Fiifi Kwetey and other national executives put the NDC on a sound track. This resounding victory of our national delegates elect implies the collective and united NDC. The delegates have shown the NDC’s readiness and assertiveness to capture power in 2024 Ghana’s general election.

The victory of the astute Chairman Johnson Asiedu Nketiah and other courageous leaders reiterate the existing hope that the delegates have in these elected leaders. The well structured and well organized National Delegates Congress deepen the strokes of the preparedness, the purposefulness of the NDC to capture power in 2024 general election to rescue Ghanaians from this repressive government of President Nana Addo and Dr. Bawumia.

The NDC is organized. We are organized in terms of personnel and policy formulation that will restore Ghana from its economic hardships. The trust Ghanaians have in the NDC is conspicuous in their daily call for the comeback of the NDC. With the election of our new national executives under the commandeering leadership of Chairman Johnson Asiedu Nketiah and our able National Secretary with other hard working national executives on board, the trust that Ghanaians have in the NDC as a serious political party to form the next government with majority seats in Parliament and to win the Presidential election is now soaring at exponential levels. The victory march to the Flagstaff House starts from the time these gallant national executives were elected. The NDC is back into its full function, ideology and motto i.e. "unity, stability, and development."

The NPP has only shown that it can only break Ghana. Breaking the economy, breaking what President John Mahama built. Under the newly elected national leaders the NDC will marshal energies, ideas, and personnel to rescue Ghanaians. Under the new national executives Ghana will surely be rescued from the NPP’s corrupt leadership and economic profiteering from government. The only hope Ghanaians have now is the coming back of the NDC on 7th January 2025.

The NDC China Chapter reassures Ghanaians that under the steadfast leadership of the national executives elect, the deceitful government of President Akufo Addo and Dr. Bawumia will come to an end come 2024 general elections. The NDC will form ‘the People’s government’ an all inclusive social democratic government that cares for you, the Ghanaians. In that these newly elected leadership exudes hope that reaffirms the biblical quote, “the night is far spent, and the day is at hand.” The victory of the NDC is forming, yet it requires hard work, collective unity and vigilance to avert the dubious machination of the NPP. Ghanaians must be awake to avoid been cheated twice.

The victory of the NDC is coming again. Now is the moment to rescue Ghana. Comrades, Ghanaians arise and defend Ghana. Rescue Ghana from the NPP’s bad governance.