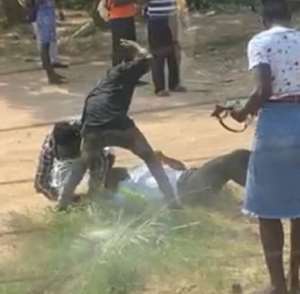 It is difficult to resist wondering whether the video of a police officer being beaten in broad daylight by a trotro driver and his mate in Cape Coast, was enacted in Ghana in 2022.

Unfortunately, the occurrence took place in this country not in the outskirts of a town and where there is no internet network, but in the ancient city of Cape Coast, the former seat of the colonial administration.

When well-meaning and concerned Ghanaians talk about the unusual degenerating discipline, this is a typical example.

We have descended so low in our discipline rating that a driver and his mate can descend upon a state agent in uniform and do as they pleased. The poor officer was only doing his work but ended up suffering this highest level of indignation. The worst could have happened, we are tempted to think, but for the intervention of some passersby, Good Samaritans.

We condemn such brutish conduct and demand that the suspects be made to face the full rigours of the law to serve as an important deterrent to others who think similarly.

We cannot continue to countenance this nonsense in this country all in the name of allowing the basic freedoms to flourish. Unfortunately, these are being abused with worrying recklessness.

That police officer is a Ghanaian like any of us who decided that he would enlist in the Ghana Police Service to serve his motherland. Should he pay a price for this decision to enforce the law at the hands of irresponsible persons, indeed hoodlums?

The ilk of the suspects should not be allowed to drive commercial vehicles, their conduct suggesting how dangerous they can be on the highways.

We demand justice for the police officer. So-called social commentators would have been talking over the roof on radio stations had the occurrence been the contrary, with the driver and his mate being at the receiving end of the assault.

Let us be citizen vigilantes in all ramifications, fellow Ghanaians. Matters would not have reached that intolerable height had persons nearby, who chose to rather relish the scene intervened immediately the stupid driver and his mate commenced their act of brutishness.

Given the vulnerability of police officers at the hands of irresponsible Ghanaian criminals which the driver and his mate are undoubtedly we demand proper kitting of cops on duty outside especially, the police stations. Had the assaulted police officer been primed with a taser or a side gun, the indignant occurrence would have been avoided.