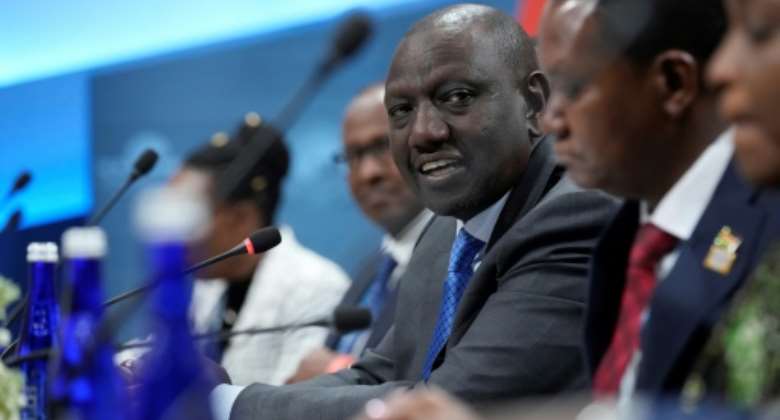 Since being elected, Kenya's President William Ruto has travelled across Africa and beyond touting Kenya's economic potential. By Andrew Harnik (POOL/AFP)

Kenyan shop attendant Winnie Wanjiru Mwaura was brimming with hope when she signed up to be an election agent for William Ruto during the August 9 polls and elated when he became president.

But barely 100 days after the rags-to-riches businessman took office on September 13, the 21-year-old wants nothing to do with him.

"Life has only become worse under him," the first-time voter told AFP.

Ruto came to power casting himself as a champion for the downtrodden, vowing to create jobs and tackle a cost-of-living crisis that has left many Kenyans struggling to put food on the table.

"If we take care of the bottom, we take care of everybody," the 56-year-old leader once told a campaign meeting, outlining his plan for a "bottom-up" economic transformation.

Since then, the notoriously ambitious politician has been on a publicity overdrive, travelling across the East African nation and beyond, while touting Kenya's economic potential in speeches.

As far as voters like Mwaura are concerned however, Ruto has done far too little to improve the lot of ordinary Kenyans in a country where about a third of the population lives in poverty.

Ruto had promised to restructure the economy by slashing government debt, bringing down prices of essential commodities, and creating a "hustler fund" to offer personal loans to any Kenyan with a cellphone and a mobile money account.

The new administration created a "hustler fund" to offer personal loans to any Kenyan with a cellphone and a mobile money account. By Simon MAINA (AFP/File)

But his first act after assuming office was to slash food and fuel subsidies introduced by his predecessor Uhuru Kenyatta.

While Ruto argued that the interventions had "not borne any fruit", their removal was a request from the International Monetary Fund, a major lender to the East African economic powerhouse.

Experts called it a rash decision.

"The move to remove the fuel subsidy was not very strategic as it has led to a slower economy, rising inflation and higher interest rates," Ken Gichinga, chief economist at business analytics firm Mentoria Economics, told AFP.

The Central Bank of Kenya raised interest rates by a cumulative 1.75 percent in 2022, the most in seven years, while inflation soared to a five-year high of 9.6 percent in October.

Ruto will mark his one hundredth day in the job on Thursday. By Yasuyoshi CHIBA (AFP)

Even Ruto's pet project, the 50-billion-shilling ($408-million) "hustler fund", has sparked controversy, with some accusing him of reneging on promises to make the credit scheme interest-free.

The fund, launched last month, will offer personal loans of up to 50,000 Kenyan shillings, with interest charged at eight percent a year -- lower than the rate of inflation.

Borrowers have already complained of difficulty in getting loans higher than 1,000 Kenyan shillings approved, despite the fund's stated objective of boosting financial access for the country's poorest citizens.

About a third of Kenya's population lives in poverty. By Simon MAINA (AFP/File)

"They inflated the prices of goods, then give you a 500-shilling loan which can only buy two packets of maize flour," Michael Wafula, a 35-year-old mechanic, told AFP.

For shop attendants like Mwaura, who earns just 700 Kenyan shillings a day, the fund will do little to change her fortunes.

Still, she borrowed 1,000 Kenyan shillings to pay for a trip to the hair salon.

'The ship is floating'

Ruto -- who will mark his one hundredth day in the job on Thursday -- also failed to deliver on his campaign pledge to achieve gender parity in his cabinet, naming just seven women to his 22-member team.

Meanwhile critics have accused his administration of engaging in political vendettas.

Earlier this month, four election commission officials who had cast doubt on the poll results that brought him to power, were suspended by the government.

"They are not behaving like they are in power; they are still fighting wars that you would expect to be fought during an election," political analyst Herman Manyora told AFP.

Kenya's President William Ruto failed to deliver on his campaign pledge to achieve gender parity in his cabinet. By Simon MAINA (AFP/File)

Despite a "disappointing" start however, Manyora, who supported Ruto's opponent Raila Odinga during the polls, said it was too early to dismiss the president and his team.

"We would give them five out of 10 because the ship is floating," he said, adding that he was cautiously hopeful.

For Ruto's hustler voter base however, the verdict is already a foregone conclusion.

"Ruto has a sweet tongue but I haven't seen anything from the new administration," said a car washer, who gave her first name as Jane.