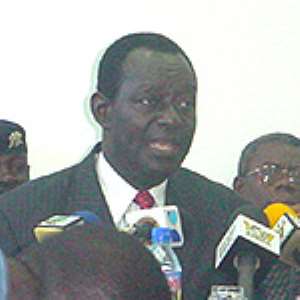 he Minister of Defence Dr. Kwame Addo Kufuor,66, has been showcasing his achievements and telling delegates in several constituencies in the Brong Ahafo region that he is running for the presidency in order to combat the menace of ethnic politics that is eating into the Ghanaian fabric.

He railed against discrimination as a negative phenomenon in politics, while assuring the members of his belief in the principles of transparency in administration, something that he would practice in his government if he gets the ticket.

According to the Minister, who spent a lot of time recounting his achievements and allowing his campaign team to dwell on, what he has done at the Ministry of Defence would be replicated widely under his presidency, since as Defence Minister, he does not have the chance to spread projects all over the country, and pleaded with delegates to give him the nod, so that the whole country could taste his good works.

Dr. Addo Kufuor, a Cambridge University-trained doctor, who threatened the UK establishment by trying for the presidency of the Students Union at this internationally-acclaimed school of conservativism and scholarship, stressed that his constituency at Manhyia in Kumasi could testify to what he said.

To buttress the point his Campaign Manager, Sir John Owusu Afriyie has admitted that the battle ahead of the New Patriotic Party (NPP) in the 2008 general election is a fierce one and therefore needed people like Hon. Dr. Kwame Addo Kufuor to lead the party, as a flagbearer.

According to Sir John, Hon Addo Kufuor was the only aspirant that no one in the opposition could point an accusing finger at, a controversial point that could open the aspirants up for snipping if it is only because he has remained rooted at one Ministry for six years while all others are moved around.

Sir John, who was addressing polling station and constituency executives at some selected constituencies in the Brong Ahafo Region noted that if a marketable candidate was not elected, it was likely that the opposition National Democratic Congress (NDC) would take over power from the NPP.

He therefore urged delegates to the next year delegates' congress to vote for Hon. Addo Kufuor.

Buttressing his point, the campaign Manager referred to a meeting between the former President, J.J. Rawlings and the Asantehene, Otumfuo Osei Tutu II, where the former President indicated that when one sees the face of Hon. Addo Kufuor, he looked like an angel, but that he is a very wicked man inwardly.

He added that the former President made this assertion, because Dr. Addo Kufuor would not give Rawlings the space or opportunity to do what he pleases, and that explains Rawlings' utterances about Addo Kufuor.

He told the executives that Dr. Addo Kufuor has a great vision for this nation and his achievements at the Ministry of Defence symbolizes what the Defence minister has for the nation.

Mr. Abed Atta Annor, a member of Dr. Addo Kufuor's team gave a very impressive picture of the minister's performance, which led to some leading media houses in the country putting Hon. Addo Kufuor ahead of his colleague Ministers.

He also told the executives that TV3, Joy FM, Accra, Justice FM in Tamale and Ash FM in Kumasi in opinion polls put the Defence Minister above all the other Aspirants.

At all the constituencies the Defence minister himself showcased all projects he had embarked on as Defence Minister and these included the Kofi Annan International Peacekeeping Centre, the Burma Hall, Computer Centre for Burma Camp, the Rehabilitation of the 37-Military Hospital, including host of others.

The executives were impressed with the achievements of Dr. Addo Kufuor and therefore urged the Minister not to only showcase these to them, but they should telecast these to Ghanaians in totality.

Background interview conducted by The Chronicle with the executives revealed that the executives were very impressed with the Defence Minister's inclusion of Polling Station Executives in his campaign tour.

According to them other Aspirants who had toured the constituencies only met the delegates and this they described as selective campaign.

They were of the view that although they would not be voting for the aspirants, their role in the party could influence the delegates' choices, since the entire constituency sometime takes a decision before travelling down to the venue of these congresses.

Almost all those interviewed advised other aspirants and party faithful to desist from saying that Dr. Addo Kufuor is the younger brother of President Kufuor. They were of the view that even twins that were born on the same day have different ways of thinking and doing things and could not understand why people should be using this as a political campaign issue against the Defence Minister.

They maintained that Hon Addo Kufuor was a member of the NPP and qualify to contest for any race in the NPP.

Sir John, told the executives that since they had realized that Hon Addo Kufuor was a member and qualified to contest, then he should be given the nod, come the delegates' congress next year.

All the constituencies toured by the Defence Minister saw massive attendance by executives and even at certain places some of them mobbed the gentle-looking doctor.

Some of them became emotionally charged when Dr. Addo Kufuor began showcasing his achievements, and maintained that some of the projects were borne through his efforts and interactions with some Ambassadors.