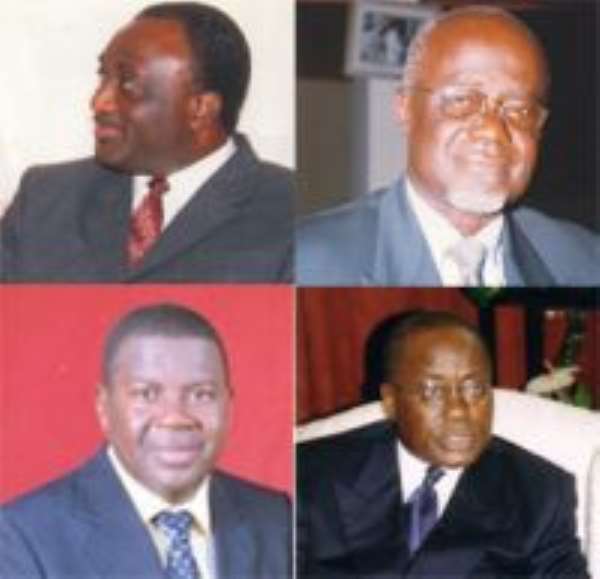 Ben Ephson, a leading electoral analyst, has predicted that, so far, only four presidential hopefuls can be considered as serious contenders in the crowded race to be the next flagbearer for the New Patriotic Party.

Those on his top four list are Aliu Mahama, Hackman Owusu-Agyemang, Nana Addo Dankwa Akufo-Addo and Alan Kyerematen. The four cabinet colleagues shared 74 percent of the results of opinion polls conducted by the known pollster.

Despite his faith in the eagerness of average Ghanaians for political opinion polls, Mr Ephson, Editor of the Daily Dispatch newspaper, does not feel that his paper's poll of NPP delegates (published yesterday) will have any great influence on them.

"It is more likely to influence the delegates,” he said, predicting that the number of NPP leadership candidates will balloon to 21 before being narrowed to eight or less before the primaries.

He said that this poll will inform delegates as to who are the serious contenders, but he noted that several strong contenders have yet to officially declare candidacy.

The publication yesterday got several tickers over-beating, with supporters of some aspirants who felt badly treated by the results insisting their own findings have been more favourable to their preferred candidates.

The pol, which featured 9 of the hopefuls, put Alan Kyerematen ahead, with 37 of the 174 constituency executives of the ruling party surveyed, opting for him. He was closely followed by the Vice President, who got 35, and Nana Akufo-Addo, who received 34. Mr Owusu-Agyemang came fourth with 23 votes.

However, in a sharp reaction to the Dispatch story, Frank Appeagyei, campaign manager for Defence Minister Kwame Addo Kufuor, one of the aspirants, has dismissed the purported survey, describing it as being far removed from the reality on the ground.

Mr Ephson"s opinion poll gave the Defence Minister 2.3 percent, placing him last on the list of the nine who featured.

According to him, Dr Addo Kufuor ranks among the best of the aspirants even though he acknowledges that all of them are very qualified to lead the party come 2008.

“He is in the front row; in fact he is the front runner,” he stressed.

Mr Appeagyei cited recent, similar surveys conducted by TV Africa and Joy FM where Dr Addo Kufour scored the highest and argued that since other media houses have different results, the Dispatch could not be relied upon.

Another source described the poll as “technically flawed.”

The results of the poll, which place recently declared candidates ahead of more obvious frontrunners, surprised even Mr Ephson.

“Boateng [Kwabena Frimpong Boateng, Chief Executive of the Korle-Bu Teaching Hospital in Accra] did better than I thought,” he said.

“And, initially I thought Nana Akufo-Addo [Minister of Foreign Affairs, Regional Co-operation and NEPAD] should have done better. But, subsequent checks have shown that having three votes less than the winner, Nana in fact performed very well. This is because I've been informed he only started visiting the constituency executives from the latter part of August.”

On the Minister for Water Resources, Works & Housing, one analyst said the Minister has recently started visiting the constituencies personally, rather than just sending representatives.

When asked why popular party members like Dan Botwe, Yaw Osafo-Maafo, Kofi Konadu Apraku and Papa Owusu-Ankomah did not fare better in the poll, Mr Ephson explained that 'delegates' were hesitant to choose a candidate who had not openly declared his candidacy.

He conceded that the next poll results may look drastically different as more candidates join the fray, others drop out, and more potential delegates are identified by his pollsters.

Speaking further to The Statesman, Mr Appeagyei said Dr Addo Kufuor has toured the length and breath of the country and the feedback from the delegates has been overwhelmingly positive.

“Delegates are enthused about his personality, achievement, and vision. Therefore he is encouraged to push for the final day,” he stated.

Mr Appeagyei admitted that the issue of perceived dynastic feelings generated by Dr Addo Kufuor possibly succeeding his brother as president, a feeling shared by some of the electorate, was a source of concern to the Defence Minister's bid but reiterated that the aspirant has an inalienable right to contest for any position in the country.

Also speaking to this paper, a source at the campaign office of Mr Owusu-Agyemang, who is also the MP for New Juaben North, said the team was analysing the credibility or otherwise of the survey for now, but remain mightily confident about their candidate's actual showing on the ground.

“We are still analysing it. We need to see if it poses any challenges to our man, and our overall campaign strategy. We are certainly looking at it seriously,” the source, who spoke on condition of anonymity, said.

However, a Deputy Minister, who spoke to The Statesman yesterday, describing himself as an “elderly statesman,” said the Minister for Water Resources, Works & Housing should be very pleased with the results, as it shows that his campaign is picking up, if the polls were anything to go by.

The Daily Dispatch has recently embarked on numerous political polls far in advance of the 2008 elections. Mr Ephson explained that yesterday's publication was merely a preliminary poll and results will change considerably leading up to the primaries.

The paper will also publish opinion polls about the general public's perception of the NPP (in today's Dispatch) and the NDC (due for publication about a week before that party's congress).

Mr Ephson refused to comment on the cost of conducting his polls, but did indicate that some amount of work is involved.

In the case of yesterday's poll, staff and researchers visited delegates over a period of four months, in many cases having to return more than once before being given an opinion.

Mr Ephson hopes that the work will pay off in an upcoming book about Ghanaian elections, in which polls are not only reviewed but additional information is given rating the performance of MPs. Whatever the cost of the polls is, the newspaper is sharing them with contributors to the book.

Yesterday's publication was the culmination of a four-month poll of 174 NPP delegates (having approached about 190 of 230 potential delegates, several of whom refused comment), out of more than 2,300 who will vote in the 2007 NPP leadership primary.

The timeframe of four months have been considered to wide (See Editoial). “We had to go back to some delegates because they refused to comment the first time,” Mr Ephson told The Statesman, hence the extended timeframe for the poll. He added that this poll is the first of three leading up to the primary; the next two will be published in February and April, respectively.

Mr Ephson feels that despite the numerous political polls being taken by companies, candidates, and analysts, those published by his paper give his readers useful information, even though the results of yesterday's poll will change drastically.

The Castle is said to have recently commissioned international pollsters to conduct a similar poll on the chances of those scrambling for President Kufuor's seat within the NPP.

Akufo-Addo fly to Paris
3 minutes ago