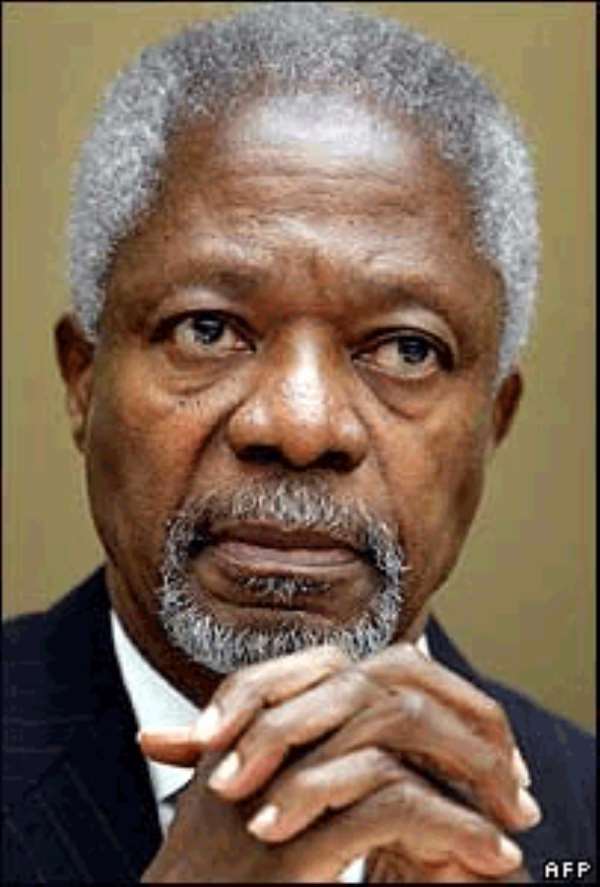 The situation in Iraq has become "much worse" than a civil war, the outgoing United Nations Secretary General, Kofi Annan, has told the BBC.

Mr Annan, who leaves office after 10 years on 31 December, said life for the average Iraqi was now worse than under the regime of Saddam Hussein.

Expressing his sadness for being unable to prevent the war, he urged regional and international powers to help Iraq.

But Mr Annan urged his successor, South Korean Ban Ki-moon, to "do it his way".

Asked by the BBC's Lyse Doucet whether the situation in Iraq could now be classified as a civil war, Mr Annan pointed to the level of "killing and bitterness" and the way forces in Iraq are now ranged against each other.

"A few years ago, when we had the strife in Lebanon and other places, we called that a civil war. This is much worse.

"We have a very worrisome situation in the broader Middle East," Mr Annan said, linking the ongoing conflicts in Iraq and Lebanon with the Israeli-Palestinian conflict and tensions over Iran.

He admitted that the failure to prevent the US-led invasion of Iraq in 2003 was a major blow to the UN, one from which the organisation is only beginning to recover.

"It's healing but we are not there yet, it hasn't healed yet, and we feel the tension still in this organisation as a result of that."

Mr Annan described the current situation in Iraq as "extremely dangerous" and empathised with the plight of ordinary Iraqis.

"If I were an average Iraqi obviously I would make the same comparison, that they had a dictator who was brutal but they had their streets, they could go out, their kids could go to school and come back home without a mother or father worrying, 'Am I going to see my child again?'

"The society needs security and a secure environment for it to get on - without security not much can be done - not recovery or reconstruction."

Mr Annan, a Ghanaian who joined the UN in 1962, became the first African secretary-general at the start of 1997.

The years before his appointment were marred by the genocide in Rwanda and ethnic cleansing during the wars in the former Yugoslavia.

Although the UN vowed "never again" in the aftermath of the Rwandan genocide and killings at Srebrenica, the organisation has been unable to end a three-year crisis in Sudan's Darfur region, where more than 200,000 people are thought to have died.

"It is deeply, deeply disappointing and it's tragic," said Mr Annan. "But we do not have the resources or the will to confront the situation."

He pledged to work towards a solution in Darfur, which Sudan's government has refused to allow UN peacekeepers to enter, until his very last moment in office.

And he was clear in his advice to Mr Ban, the South Korean diplomat who will pick up the reins at the UN's New York headquarters on 1 January.