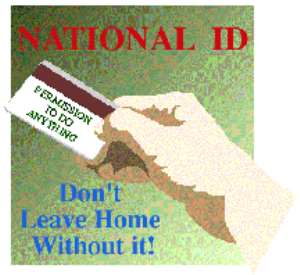 GHANAIANS have been advised to get involved in the National Identification System because it is a laudable project that will ensure sustainable development.

Dan Abodakpi, Member of Parliament for Keta, said Ghanaians must be committed and dedicated to the exercise when it commences next year because it will help in promoting the nation's development agenda.

He was speaking during the celebration of the maiden Sugarcane Festival (Fonon—za) of the chiefs and people of Hatorgodo in the Keta district.

The people of the area, which is called 'Sime' (water area), mainly brew a local gin known as 'fokel' from sugarcane as their main source of livelihood.

The festival, themed: “Mobilising resources for solid economic development” was initiated to help Mobilise the citizens of the area to develop their communities.

Mr. Abodakpi described the national identification programme as “a laudable exercise,” saying it is important in determining the distribution of social amenities in areas and also provide job opportunities.

He bemoaned the falling standards of education in the region and advised the to people ensure their children's education since it is the surest means for them to escape poverty and ignorance.

Edward Ahiabor, Keta District Chief Executive, noted that although the soil in the area is the richest type suitable for the cultivation of sugarcane and rice, there are plans to introduce alternative livelihood projects to assist the communities.

He said experts from the University of Ghana and Europe recently visited the district to advise the assembly on projects that can be introduced to improve farming activities in the area.

Togbui Agblevor III, Divisional Chief of the traditional area, in a welcome address, called on the government to dredge the entire stretch of the two lagoons in the area to minimise the perennial flooding of their farms during the rainy season.