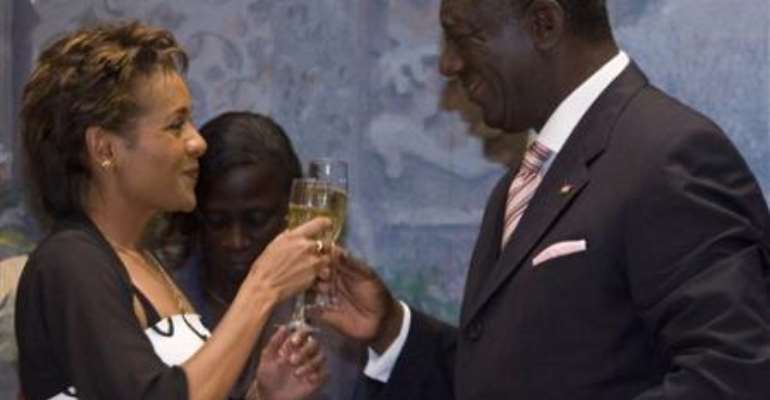 President John Agyekum Kufuor on Tuesday hosted the visiting Governor General and Commander in Chief of Canada, Right Honourable Michaelle Jean, to a state dinner in Accra, where he acclaimed the long standing relations between the two countries.

Proposing the toast, the President traced bilateral relations to March 6, 1957 when Ghana gained independence from British colonialists and said the visit of the Governor General was testimony to the warm relations.

Showering praises on the Rt. Honourable Jean, covering her academic pedigree, personal life story and her nomination as the third woman and the first of African descent to occupy her present position, President Kufuor described her as a source of inspiration that Ghanaians and Canadians alike had fallen in love with, attracting prolonged cheers. He said the track record of the ruling New Patriotic Party to good governance and democracy among other things had been acclaimed worldwide as a success.

President Kufuor said his administration had launched a vigorous infrastructure development, which he said had enjoyed tremendous support from Canada.

He said Ghana was the recipient of the largest Canadian aid in Sub-Saharan Africa.

President Kufuor said Canada had decided to double its development assistance to developing countries in 2010 and halt the spread of HIV/AIDS in 2015.

Responding to the toast, Rt. Honourable Jean traced Canadian support to Ghana to 1906 when missionaries from her country established a mission in Navrongo.

"Ghana is also home to the longest running aid programme led by the Canadian International Development Agency (CIDA)," she said.

Rt. Honourable Jean said presently there were some 17,000 Canadians of Ghanaian descent.

She said the economic partnership between Ghana and Canada must be practiced within an ethical framework "respectful of the people, respectful of their needs and aspirations and respectful of the ecological integrity of the land where we draw our resources." Rt. Honourable Jean commended President Kufuor for undertaking reforms in the judicial system in order to make it transparent and accessible to all.

She also lauded the performance of Ghana in the 2006 World Cup and expressed the hope that the country would do better in the 2010 tournament in South Africa.

Tracing her roots to Africa, w hich attracted spontaneous cheers from the audience, she said the time had come for Africa to recapture the moment of African History in order to move ahead.

"As Governor General of Canada, I am pleased to acknowledge that my country and Ghana have achieved a great deal together in the past 50 years. I am certain that we will achieve even more in the years ahead. "May Canada and Ghana continue to build on the solid foundation of friendship that is our shared legacy. May we draw inspiration from our shared success and work together for the good of this nation, for the good of Africa and for all humanity," she added.