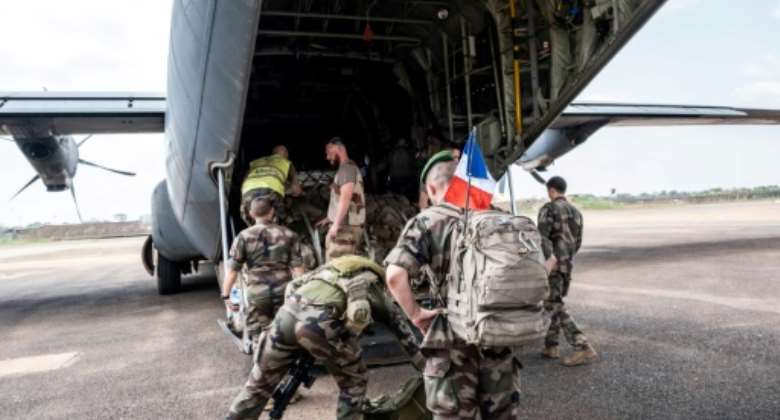 The last French troops deployed in the Central African Republic left on Thursday following a chill in relations caused by closer ties between Bangui and Moscow, an AFP reporter saw.

Forty-seven troops from a logistical support unit left Bangui airport aboard a C-130 transporter aircraft, becoming the last of a 130-person French contingent to leave the troubled country.

France, the former colonial power, dispatched up to 1,600 troops to help stabilise the country after a coup in 2013 unleashed a civil war along sectarian lines.

The operation, named Sangaris, was France's seventh military intervention in the CAR since the country gained independence in 1960.

It wound up in October 2016 after elections, leaving a residual French contingent.

Over the last few years, friction has grown between France and CAR over a mounting Russian military presence.

In 2018 Moscow sent instructors to the country, and in 2020 followed this with hundreds of paramilitaries to help President Faustin Archange Touadera defeat rebels advancing on the capital.

One analyst called the move a 'very strong sign of discontent'. By Barbara Debout (AFP)

"France decided that the conditions were no longer appropriate for us to continue working for the benefit of the Central African armed forces," General Francois-Xavier Mabin, the commander of the MISLOG logistical force, told AFP.

French troops stationed at Bangui airport's M'Poko base had been providing logistical support for the European Union Training Mission and a contingent of the UN peacekeeping mission in the Central African Republic (MINUSCA).

"It is with great regret that we note this unilateral withdrawal," said Fidele Gouandjika, special adviser to President Touadera.

"Today we have a battle-hardened army -- thank you, France, which has been training and equipping it for 62 years," he said, adding: "Now we are going to do (it) with Wagner."

Roland Marchal, a researcher at the Sciences Po school in Paris, called the French pullout a "very strong sign of discontent."

But "from a military point of view, it won't change much because the scope of the mission became more and more restricted," he said.

Earlier this year Paris withdrew the last of its troops from former colony Mali.

They had been deployed since 2013 to help the country fight a jihadist insurgency.

Relations between France and Mali plummeted after the military seized power in Bamako in August 2020 and eventually brought in Russian paramilitaries.

CAR ranks among the poorest and most unstable countries in the world, and continues to bear the scars of the traumatic war.

Violence has fallen back in intensity since 2018 although swathes of territory lie in the hands of rebel groups and civilians continue to pay a high price.