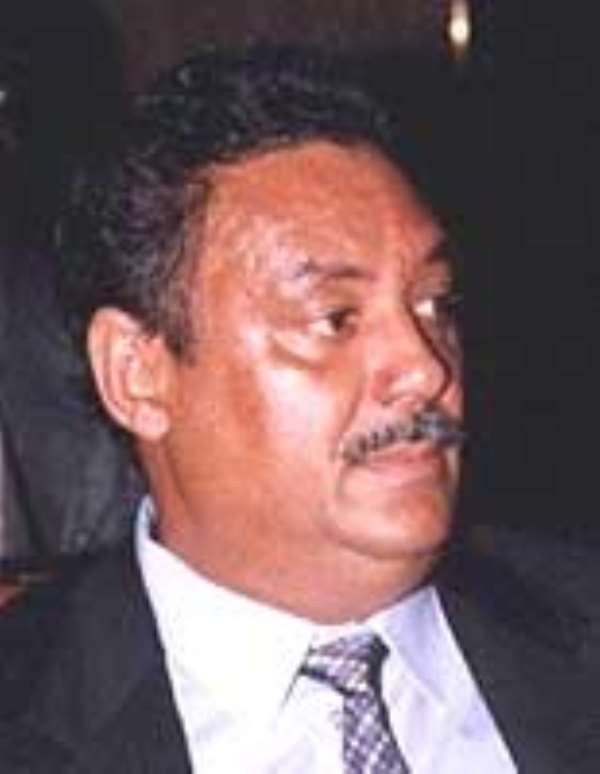 ...of voting for the NDC
Jake warns Ghanaians and tells party supporters not to allow power to “slip from our hands”

The Minister of Tourism and Diaspora Relations, Jake Obetsebi Lamptey has stated that the greatest mistake that the NPP can commit is to allow the NDC to come to power again. “We would have done the nation a great injustice”, he said.

Speaking at the Greater Accra Annual Delegates' Conference last weekend, Obetsebi-Lamptey said though the NPP like every human institution is bound to have problems, it cannot allow its differences affect Ghanaians by losing the 2008 General Elections.

Holding two mineral water bottles, one full and one half full, the former Greater Accra Chairman explained that “the empty one is what the NPP inherited from the NDC, and the half filled one is how we have filled the empty bottle up to now”. Jake Obetsebi-Lamptey who spoke in a lot of parables also compared the bottle to a seven-storey building and said, “We came to meet a big pit. We have struggled to build the foundation, build room 1 to room 3, now we have to build the other rooms”, he said.

He told the party faithful who had thronged the conference that “room 4 to room 7 can only be completed if the NPP government takes over from an NPP government. We don't want to start from a pit, but build on the 3rd floor onwards…this also means that everyone's needs cannot be met at this time”.

Jake, who is rumoured to be interested in taking the mantle from President Kufuor in 2009, elaborated on some of the good projects that the government is embarking on and urged the members to remain steadfast in the time of difficulties.

He advised his party members never to compare themselves to the NDC when confronted with problems. “Some of you are saying that during the NDC's time their members were enjoying… Let me tell you, if the NDC comes to power, you will never benefit from them…so it is better to queue with hope than queuing without hope”.

With the shout of the party's slogan, he asked the members if their problems meant the party should be divided and lose power. “We would live to regret if power slips from our hands”.

He pleaded with the leadership of the party in the region to solve all the differences in chambers.

“Let us have faith that everything would be well,” he said.

“We know what you can do, you have done it before and once again I urge you to lead us in getting a leader who can continue the good works that this government is doing. We would follow any leader you give us. We have put all our dreams under Greater Accra”.

As a politician and a presidential aspirant, veteran Hackman took the members through the drills of what a good leader is made of. His biblical turn of phrase seemed to have struck a chord with his audience.

He stated that the NPP is winning power in 2008, and reiterated that the government distributes the national cake equitably. He said President Kufuor is a good leader, who is caring and would not dream of neglecting any part of the country.

Hackman Owusu Agyeman gave an instance where the people of Sege and Yeji in the Volta Region did not vote for the NPP, but “government has not relegated them to the background in many projects, especially in terms of water projects”. He was given a standing ovation with shouts of 'pastor, pastor' after his speech.

The Greater Accra Regional Delegates Conference was held against a backdrop of disturbances within the party which some political observers say could cost the party vital votes in the region. “Should Greater Accra be destabilized, then we are finished”, said an obviously nervous party supporter. The Greater Accra rumpus is being traced to supporters of a particular presidential aspirant who are now at open loggerheads with the regional executive, with no sign of compromise either way.