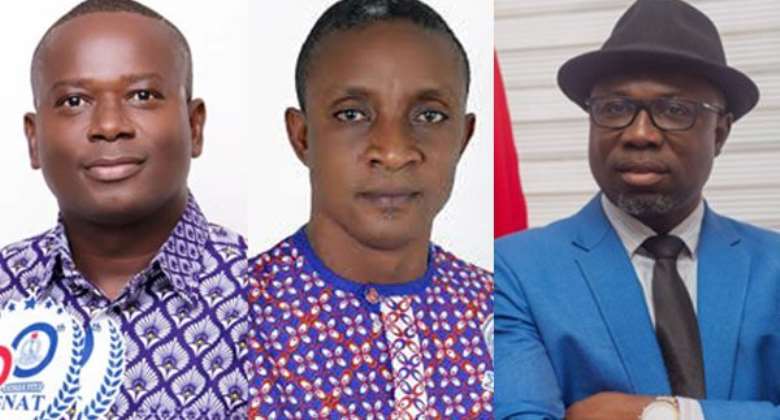 Insiders within the education space, have let The Herald in on developments in the sector with reports that, the Ghana National Association of Teachers (GNAT) with over 250,000 members, has heavily been infiltrated by the New Patriotic Party (NPP) government, with the objective of capitalizing on it to break the teachers' front and douse its power.

The paper is informed that, the Association together with its sister union, National Association of Graduate Teachers (NAGRAT) with over 60, 000 members, is seen as a very strategic body for the political fortunes of the governing New Patriotic Party (NPP) and nothing is being left to chance.

This paper is learning that, GNAT's front is almost broken by the Akufo-Addo government with some key leaders regularly holding meetings inside the Jubilee House. This is said to have heavily affected the influence of GNAT and it is unable to plan anything progressive for its members.

There are reports that, there have been instances where letters are written to state institutions, including the presidency for financial assistance without the knowledge of the General Secretary, Thomas Musah.

Among the executives mentioned as compromised by the NPP to work against teachers' interests are Rev. Isaac Owusu, the GNAT President and John Owusu, mentioned as a National Trustee of GNAT.

The two are said to also be in the company of one Dr Christian Addai Poku, a former NAGRAT president, as frequenting the Presidency. Dr Addai Poku, is said to be appointed as registrar of the National Teaching Council by the Akufo-Addo administration.

A position he got when the Akufo-Addo government came into office. It was seen as a reward, following his determined stance against the Mahama administration.

These three individuals are said to be in collusion with other executives to remove the Ashanti regional chairman, Prosper Takyi and the General Secretary, Thomas Musah, who have both worked tirelessly to get cost of living allowances for teachers and also negotiating new wages for 2023.

The Herald's information is that, the infiltration agenda began after Nana Addo lost the 2012 elections for the second time in a row, and he and his campaign strategists, decided to incorporate proxy pressure groups to break a number of workers' fronts across the country.

First on the list, was the teachers front, they formed the Concerned Teachers Association led by one Ernest Opoku. There is a teacher in every community in the country and holds an influential place.

The Concerned Teachers were used to spread negative stories about teachers' treatment by the Mahama-led government, including the infamous nonpayment of allowances to teacher trainees among others. They were constantly in the media, especially on the Twi-speaking media houses bashing the then ruling National Democratic Congress (NDC) .

Another front that politicized was the drivers' front. They formed the Concerned Drivers Associations led by one Charles Danso, who later broke away due to what insiders said was “Edidigya”, when Nana Addo came to power. Also involved then was one Appiah, who is now dead. Together they spoke about the cost of fuel for their vehicles, spare parts among others.

Thirdly, was the formation of the Unemployed Graduates Association, although most of its members, were gainfully employed.

But the most lethal was the Concerned Teachers led by Ernest Opoku, who was the go-to-person with the Nana Addo camp, and followed through to become a registered union and now asserting their rights as a teacher union.

Although, there is said to be teacher despondency under the Akufo-Addo government, the NPP has not forgotten about that strategic front.

But despite their frantic effort, the administration couldn't penetrate the NAGRAT in particular. The group led by Angel Carbonu, was resolute, however, GNAT fell some two years ago, after a well-planned and fully executed strategy at the GNAT 2021 Delegates Conference was deployed.

By its constitution, the GNAT elects its executives every 4-years.

After the tenure of the Mrs. Philippa Larsen administration-led ended, it was now time to elect a new set of National Officers. Many have argued that there were several attempts, but that administration could not be bought by the NPP and Akufo-Addo administration.

In the January 2021 National Delegates Conference of GNAT which took place at the Great Hall of KNUST, party bigwigs of the NPP, notably being Ashanti Regional Chairman, Antwi Boasiako alias “Chairman Wontumi”, Ashanti Regional Minister , Samuel Osei Mensah, openly and brazenly shared loads of cash to send the polls to elect a new national president into a run-off, and more loads of money in the last round, against the favourite.

In that Election, the favourite Prosper Takyi, Chairman of GNAT for ASHANTI and Rev. Isaac Owusu of the Central Region were in pole position.

Sources indicate, prior to that 2021 election, the Ministry of Education led by the Education Minister, had called Prosper Takyi into a meeting to support the cause of the Akufo-Addo government and by so doing, he would be supported massively to win the election.

But being a principled educationist, he refused, arguing that he would only be elected to advocate for the welfare of teachers and not carry any government's flag.

Sources indicate, Mr Takyi was met by ministers of the sector to operate on their side, but refused. They then jumped to the current President who went along, got elected with just 3-8 or so votes, after the second round.

It will be recalled that since the 2012 elections, the NPP, have tried to break up the GNAT and NAGRAT unsuccessfully through the Concerned Teachers Association.

It, however, created division among teachers under the Mahama government. NAGRAT was then led by Christian Addai Poku to create mayhem against John Mahama.

After winning power, Christian Addai Poku, was rewarded with the position of Executive Secretary of the National Teaching Council (NTC).

Insiders disclosed that breaking the GNAT and NAGRAT fronts are important to the NPP and Nana Addo, because the government knows too well it has not only destroyed secondary education through its poor implementation of the free Senior High School programme, but also destroyed education in general.

Currently, the President of GNAT, Rev. Isaac Owusu, and other national executives troop to the Jubilee House often to have meetings.

As part of the rules of engagement and norm established by GNAT over the years, going to the presidency without any authorization of the National Council and the General Secretary, compromises the ability of the union to negotiate with the government.

But the current National President, because he is NPP alongside other executives like John Owusu, the 1st National Trustee, they compromise their right to negotiate fairly for better wages by being in bed with the Nana Addo government.

As part of the grand agenda, since they came into office, they have sought to frustrate the General Secretary and other Assistant General Secretaries in the National Administrative Secretariat.

By the Constitution of GNAT, the Administration led by the General Secretary, is equal to a CEO to run the national office, while the elected executives provide leadership to their membership to enhance the welfare of members.

In Article 32(2) of the Constitution, the General Secretary is designated as the CEO of the Association.

The GNAT President, Rev. Isaac Owusu, is said to be going beyond his powers to even issue queries to the General Secretary to an extent promising the Minister of Education that he can convince the teachers to agree to appoint a Director General, who is not from their ranks.

This is what led to the agitations recently about the appointment of the new Director General of the GES, following the removal of Prof Owusu Amankwah, a trained teacher and educationist.

Rev. Isaac Owusu, has created his own letterhead and uses that to communicate with the Minister of Education and the Presidency, without the knowledge and approval of the National Council of GNAT. This is also clearly in breach of the GNAT constitution.

Towards 2024, the bigger agenda, according to insiders is for Rev. Isaac Owusu, to further weaken the teachers' front, which is already demoralized by government's poor remuneration.

Interestingly, Rev. Isaac Owusu, is also said to be in support of the government offering only 12percent wage rise to teachers, instead of the 60percent they are asking for.